Big night out : the Russians 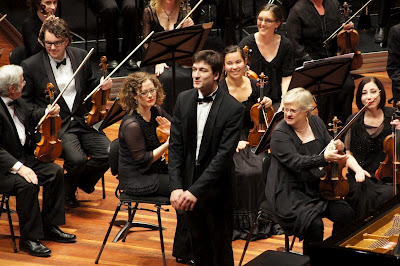 It’s pleasurable going to a CSO gig these days. It’s a like a big family. We don’t really know them, but we recognise so many faces, on an off stage. This was the second night of two for this program and the Llewellyn was sold out. That’s good. I imagine people are rallying around our musical assets with the changes at the Music School.

The program was Shostakovich, Rachmaninov and Mussorgsky/Ravel. The Shostakovich was a light piece that the program advises had been churned out at short notice. Apparently he was a brilliant composer who could chat and write and deliver all at once. Certainly, they talked of couriers taking pages while the ink was still wet and the performance just days later. It may have also been an ironic statement and a protection from Stalin’s interests. I enjoyed it, but as I write this, a few days and concerts later, it doesn’t leave any particular image other than of pleasure. Not so the Rachmaninov. This was his Piano concerto no.2 in Cmin and it finished the first set. This is what I think of is Russian music. Three movements with a turgid start, dense and soupy, swells and discoveries and denouements, military marches and busy, full-handed playing and lots of notes. Busy and detailed and informative like richly painted Russian novels. It was amusing to recognise a pop song in the second movement (was it the Carpenters?) and the theme of the third would have done equally well. This was big and turgid and typical.

After the interval was Pictures at an exhibition by Mussorgsky and orchestrated by Ravel. I hadn’t realised it was exactly this: a tone poem about an exhibition. The core theme that we all know is someone walking through the exhibition (the Promenade) and it reappears in varying forms between most pics. I’m informed that the paintings are actually not particularly special, more drawings than paintings, but it interests me that we know exactly what paintings each tunes refers to. Interestingly, one features an alto sax and a glowing report of its role was quoted in the program, but I could only imagine that every saxist must be pleased that jazz came along. It was a pretty tame line to my ears. Otherwise, there are features for tuba and trumpet and others. I expected to find this too popular, but I must say I enjoyed this best of all the pieces on the night. It’s varied in colour and melody, it’s nicely structured and has that hugely memorable theme to hold it all together. And I felt it was well played by the CSO. I don’t imagine it’s the hardest piece in the repertoire, but the basses got some speed up a few times.