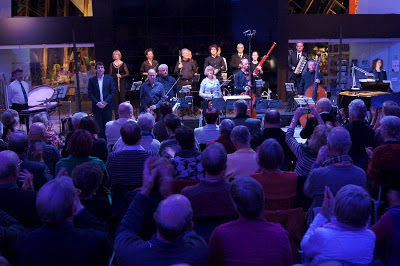 Chris Latham led the Canberra Camerata Chamber Orchestra for a performance of the Mahler Symphony no.9 at the National Museum and they did a great job. It’s only a little orchestra and there were times I missed big strings for the sprawling expanses, but how well did they do with what they had? The various winds were there and spot on: flute, trumpet, oboe and others that felt just right, spelling out the lamenting lines with precision and empathy. The strings were just a quartet with the addition of bass. 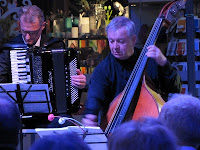 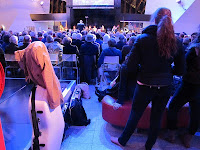 They weren’t big and suffered for that, but they were clear and the lines were evident, so that the intellectual construction was clear. Perhaps the violins suffered most from the lack on numbers, but they smaller and less space-filling. The cello and especially the bass seemed to be nicely present. The orchestra was filled out with piano, accordion and percussion. Piano and especially accordion seem unusual for a symphony. Perhaps Mahler wrote for them, or maybe they were included in the arrangement to provide some body or to complete some parts. Both are instruments that play chords, so each can take the place of several single note instruments, strings or others. That said, I could hear the accordion easily enough, but the piano was kept well back. I only remember noticing it a few times. But despite the smaller scale, this was an immense success. I wallowed in some trumpet parts and gloried in flute and oboe, was excited by percussion and empathised with strings and cello. This is a long and contorted work: about 90 minutes in 4 movements. The program spoke of Mahler’s awareness of death, farewell to love and pleasure. It was certainly a sombre work, and perhaps a premonition of WW1 to follow only years later. The program also suggests that Mahler had faith in an afterlife, but this sounded to me a secular lament. It would be a strange faith that speaks quite so mournfully, even hopelessly. The context of the work was set for us by Marion Mahoney-Griffin, or at least by her alterego. I’d not been quite so comfortable with her husband, Walter’s, appearance the other day before the Sculthorpe piece, but I’m warming to the pretense. This was an excellent touch, setting the context of WW1, the losses and the associated delays in development of Canberra; more specifically, how the planned civic centre at the base of Mt Ainslie became a memorial to the WW1 dead and how the lake was delayed 50 years and how the railway didn’t appear at all. All very relevant and informative. So, set in the context of turn-of-the-century Europe and Griffin Canberra, this work was clarified, if it remained turgid and even indecisive at times. I enjoyed much of the middle parts and even the slow development and denouement, but the endless end had me chuckling quietly to myself. The concert was entitled the last Romantic symphony. The mistakenly described war-to-end-all-wars saw to the end of all that. So, long and even ponderous it may have been, but it was also touching and speaks to its era. Chris and the orchestra did the work proud. Wonderful.

Just a few final words about the venue. It’s a strange acoustic with hard surfaces in strange shapes. Before the concert I clapped and heard a single slap-back. It’s very live, and that’s good for a smaller outfit like this, making it bigger than it sounds. As with many such institutions, it had a noticeable aircon hum that appeared several times during the performance. I was talking to their local sound man, and they seem to have digital 64-track capability on hand. So it’s a unique acoustic environment as well as being a unique visual space.

Oh, I would love to have heard this - unfortunately most of May was a write off for us concert wise. I do love Mahler --- he knows how to get to the heart.