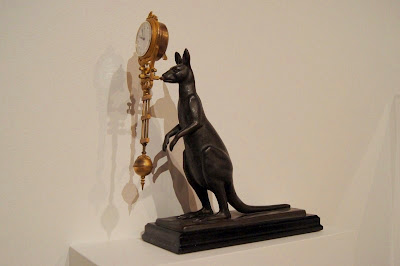 It’s strange how things coincide, in this case, decorative arts and birds and the blues. We’d gone to the Canberra Museum & Gallery (CMAG) to see the exhibition “Australia Revealed : decorative arts from the Australiana Fund”. It’s a small but delightful exhibition of decorative arts that were purchased for use in four official residences: Admiralty House and Kirribili in Sydney and The Lodge and Government House in Canberra. These are formal residences, so doughty but quality works are expected.

We got heavy cedar furniture from the nineteenth century and statues of heroes of whatever era and some nouveau curves and toby jugs and silver and more timber and china and some more modern pieces. The star of the show was Bertram Mckennal, but he always is the star with his lithe female nudes. It gets the guys in the gallery and the admiration of the women, too. This one was a small figure called Truth, but the woman looked all the world like McKennall’s Circe to me, except for her angel wings and pose. I was amused by several pieces of porcelain: a toby jug of sailors presumably arriving at Sydney Cove and some life-sized sulphur-crested cockies. The earlier works were heavy and dark and functional, but they, too, featured Australian fauna. We were interested to learn of a new piece of furniture - a cellarette, shaped like a sarcophagus - which just had to be for storing wines in the dark with some temperature control. What a heavy life they must have lived in our hot clime, given the dark furniture and heavy clothing. Just proof of the “mad dogs and Englishmen” thesis. It’s a small exhibit, but there are some interesting works of quality that inform our history. Much enjoyed. 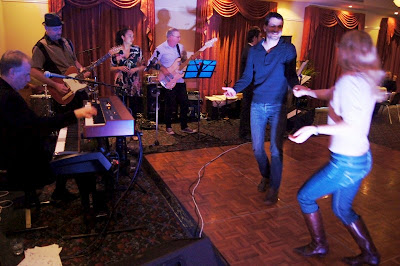 Walking on through CMAG, we came across a dead parrot (you wouldn’t write of it!) attached to the name of Dr Leo Joseph and thus to the blues. Leo researches the evolution of Australian birds at CSIRO, but he also moonlights playing the blues. His band, Key Grip Full Strength, was playing at the Brassey that very afternoon. Leo plays solo or in a smaller outfit or with his band with the Gripping Stuff horn section as KG Full Strength.

This is New Orleans swing: laid back; sharp guitar; passionate vocals; and good for a dance. It’s all blues and blues isn’t noted for its variety. I noticed some consecutive count-ins that were the same tempo, even if the groove was different. And the chords are just that, the blues: twelve bars with classic bass-lines. It’s a style and there’s a good degree of sameness about it, but it’s also invigourating, danceable, sometimes witty, and can be impassioned. The horns add punch and colour, but also a bit of jazz sensibility when they insinuate dissonance and cross-rhythmic flourishes amongst blues licks. Dave’s guitar is sharp and I noticed some nicely sophisticated intervallic touches. There’s banter from Leo and Mitch and vocals from Leo and Angela with her hefty alto voice. And the inevitable, classic pentatonic bass lines from Greg. Blues is like that. Human scale and unpretentious and great for some beers, or many.