Concert as education and more

Monash University made an appearance this month at St Albans. Robert Chamberlain, lecturer, and Daniel Liston, masters student at the Sir Zelman Cowen School of Music performed on piano. Unsurprisingly, given their connections, this was also an educative experience. They performed music of Haydn, Rachmaninov, Ravel and Bartok, but they also introduced each with a description of key themes and structures of each work, so we understood and associated more easily with each. So this was both learned and artistically satisfying. 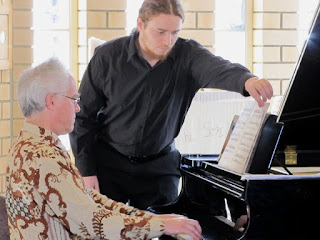 Robert started with Haydn’s Andante variations in F minor. This is a dark key, but it modulates back and forth three times to F major, each time becoming busier and more embellished, to then finish on another key. It’s a mature work, written in 1793. I was also enjoying the confident playing of someone who works with music every day: not showy, but steady and wonderfully competent. Then tow prelude by Rachmaninov. The C minor Op.23 no.7 which Robert described as “swirly” and I heard as busy with not much dynamics, but lots of notes in slow arpeggio-like sequences that rose and fell and mutated against a slow upper melody, and the B minor Op.32 no.10 which was more sombre and a “gorgeous buildup” and with a restrained start developing into full-handed chords, but with space and some tentativeness. 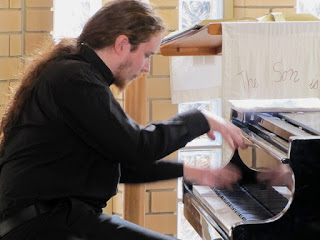 Daniel played a Ravel piece with a title translated as the “Gallows”. This was a work in 3/4 time with a constant bell-like high note pair that runs throughout. I mentioned in another post that gondolas are not lugubrious (despite Liszt’s tune of that title) but gallows are. This did seem lugubrious to me with chordal melodies and that ringing boll over all. This impressed me as a knowing response to a ghastly activity. This is an aware humanity, not an ignorant ideology with just a touch of major tonality for hope. Then Daniel introduced Bartok’s piano sonata. He’s writing his thesis on folk influences in this piece, so his introduction was particularly relevant. He spoke of 3 note themes in several movements and motifs and clashes in the second movement, and obvious folk references in the third, imitating flute and fiddle, and a Colinda rhythm (from Romanian carols). I liked this, all staccato chords dissonant, unyielding and slow and sparse in the second movement.

The Haydn was perfectly good lunch-time music. The rest was a much bigger challenge for the ears of this audience, but I liked it immensely and especially liked what I took to be an intellectual, unfussy take on the music: not too emotionally charged, but deeply investigative and informative. I think that’s why baroque is popular these days rather than the emotional swirls of romanticism. We live in a free and rational world these days even if our anger can be easily and ideologically channelled. The good side is the freedom and rationality, as in this concert; the bad side is the two minute of hate. We are well past 1984.

Robert Chamberlain (piano) and Daniel Liston (paino), both of Monash University, performed at St Albans.
Posted by Eric Pozza at 11:33 am