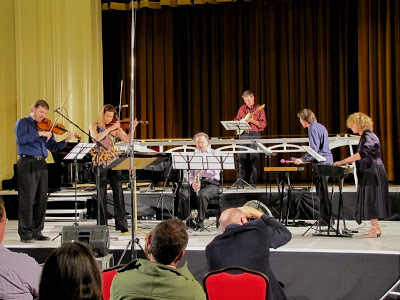 “Make me feel good, rock and roll band / I’m you’re biggest fan / California coming home”. So sang Joni Mitchell. Paul Dresher performed at the Albert Hall and he did some things differently. They say they do things differently in California, the home of hippies and Hollywood and Silicon Valley. It also gave us Ronald Reagan and it’s also broke. Jazz looks to civilisation and lives in its undercurrents, in NYC and Berlin. California channels the fresh and new, at least to our generation. So Paul Dresher presented his Double Duo in concert with compositions relating to our sense of the passage of time and to fuel drag racing. Paul himself performed on electric guitar (Strat) so the R’n’R reference has some validity. He also performed on Quadrachord, a five-stringed instrument of 160-inch scale which he bowed. So here’s the new and the quirky together. I didn’t particularly warm to the use of either instrument. Paul doesn’t attempt Steve Vai although he does solo, but the distorted tones were lacking in overtones and seemed to just fatten the mix and get lost in it. It might work better with studio processing. Similarly, the Quadrachord didn’t seem to provide a whole lot more than repeating sequenced arpeggio-like harmonics, although there was an intervening sound each cycle that was maybe a double stop. I was thinking it must have cost a bomb to transport. So much for the R’n’R and the quirky Californian aspects. 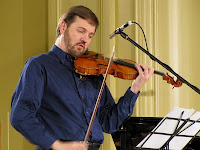 But did I like the music? Immensely. This was minimalism, repeated arpeggios and sequences that mutate over time, square structures of four with melody over, brilliant dissonance and consonance switching back and forth, stubborn contradictory polyrhythms, dense clouds of percussion that regularly float over, dull repetition and deep groove with obtuse melody and clashing harmony and splashes of colour from bell-like percussion. It’s a world of dull repetition and enlivening contrast. I frequently remember a murder and chase street scene from Bladerunner as a picture of a possible future: huge diversity of people and clothes and cultures under constant rain and huge neon signs and police in flying cars descending next to Asian street hawker kiosks. To some degree dystopian; to some degree diverse and exciting. I picture both California and minimalism as somewhat like this. I can doubt the mind-numbing repetition of the fours and triplets and two chords and the rest, but I tap my feet with this music and thrill with the incongruity of it all, the unexpectedness of melody and harmony, and especially the rhythms that clash and contradict but are sustained, wondering all along that it holds together and speaks to me. There’s even a sense of soloing here, from distorted guitar or clarinet or expecially from the violins, but it’s written, not improvised.

It’s not surprising that this was one of the smaller audiences at a CIMF concert. It’s new music, although minimalism is not too new now. I’d picked it. Megan’s normally a listener to Bach and Beethoven but she liked it too, suggesting it’s better live. Maybe. It grows and mutates like a living thing and that probably works better live. This was another concert with a Quiros St connection. Our no.2 billet is Graeme Jennings. He knew these players in SF but had never played with them until he played a solo part in Cage Machine on this date. This was a great gig. I felt satisfied and excited and intellectually requited. There’s great tradition in “fine” music and I love it, but this is music for our time and I’m pleased to see it’s so well grounded. Great gig.