Patriots and eggs and the sea 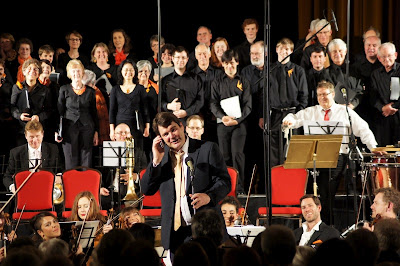 There was a line in The Great South Land saying that Ferdinand de Quiros was the first Australian patriot. It’s about the only thing in the whole work that I didn’t admire and enjoy immensely. We attended the premiere (in this form) of Peter Sculthorpe’s Great South Land, an oratorio celebrating de Quiros, his search for the imagined southern land and his naming of Australia. This is a big, expansive work, lasting just under 100 minutes, in three parts, telling the story of his first and second voyages and attempts to fund a third. This is the late 1500s, at the end of the great period of exploration by the Portuguese. There’s narration by Peter Tregear, voices of Quiros (Andrew Goodwin) and his wife, Dona Ana (Louise Page), and a young soprano, perhaps his daughter, Geronima (Stephanie McLean or Hannah von Thrumm), his commander on the first trip, Medaña (Andrew Goodwin), and his wife, Dona Ysabel (Christina Wilson). The presence of the women was interesting. We think of the adventurers as men, but the women were involved with the lack of husbands for long periods. Like a war, really. And Dona Ysabel seems to have accompanied her husband and called off the first trip to the disappointment of de Quiros.

I loved it from the top, with an imposing entrance, leading to cello harmonics bird calls and swelling strings and brass that spelt rolling seas. I learnt another term this week, eggs, used for whole notes. There are lots of eggs for the strings and often for others. This does not move quickly, It’s like synthesisers with swells and decays. The strings were especially so, while the brass seemed to spell out melodies in short little phrases, although they too were gently formed. The basses (there were 4) were also on the long notes and they stunned me with a huge presence both pizz and bowed. That might be from the room. This is a live room, rectangular, windowed, proscenium arched and stucco-decorated. The percussion also rang out and they are by nature harder, tubular bells or drums. The bells contrasted nicely with the billowing wave-like presence of the rest of the instruments. This was an oratorio. There were several choirs gathered: sometimes singing, early on with back to the audience to give a distance that spoke of the sea, later often speaking lines, sometimes in gathering power with one of the voices. There were five voices for the characters. I enjoyed the varied tones of mezzo and soprano and soprano, the pure girl soprano, the powerful mature soprano reachggn to the heavens, the milder mezzo. I thought Andrew Goodwin’s tenor Quiros was particularly good.

It’s a fascinating story. I would have liked to read the libretto. Perhaps one disspointment was that I missed most of the story. The discoveries, the deaths, the power in the background and the influence of the various women, the dedication to a cause and the failures and bravery of it all. Apparently Peter Sculthorpe has followed the story all his life. He wrote an opera – this oratorio is that opera in new format – and the characters in the history of this work are fascinating: Nugget Coombes, James McAuley, Manning Clarke, Opera House, ABC fiftieth anniversary. Apparently we should add Chris Latham to that, because he had a role in promoting this oratorio version. In the end, this wonderful performance was broadcast live to ABC FM and Chris Latham even brought Sculthorpe into the room by mobile phone to hear the reception of his work. This was truly a memorable night with a winning work of historic interest. But then, it had special relevance to us for two reasons: we live in Quiros Street and we are billetting James Eccles, one of the viola players in the orchestra.