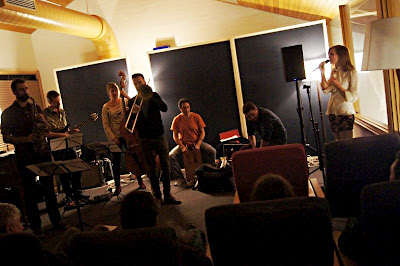 There’s been so little jazz recently so I was annoyed to have conflicts. We’d had tickets for the CSO concert for some time so I expected I’d miss Lucian McGuiness, but his gig started late and I managed at least one set (and a few bars of the first).

I really liked this. Lucian lives in Amsterdam these days, but wrote and arranged a set of tunes with Sarah McCallum (aka Miss Little) over the Net. There’s a lovely mix of influences here, rockabilly, jazz, indie / folk, so I could imagine all sorts of audiences. It would be as presentable on JJJ as it is on ABC RN and perhaps insinuating itself onto Dig Jazz. And beyond all this, there’s also a gentleness with the two percussionists in place of drums: much softer, less insistent, although I also heard some heavy deep kick-equatable thumps from the cajon at times. Sarah’s voice is not one of power and there’s no scat. To my ears, this is the indie influence, that soft, folk-influenced style that’s so popular these days. But she also takes an intriguing harmonic role, often spelling chords with the two horns, virtually taking an instrument. The song titles, and what lyrics I heard, suggest some fairly serious personal messages shared through story-telling, but I didn’t catch much. I loved the guitar solos of chunky tone and indeterminate pitch, all country licks and vibrato chords, although like everything here, always with a jazz awareness and training. Zoe and the rest of the band sits into this gentle country-presence over a sea of percussion which was present and underlying but not at all prominent. These are capable but unassuming musicians. OF all the players, the two horns said jazz to me most of all. Both played solos of complexity although not abandon, and their written lines were sweet and of one mind and comfortable in the context. It might sound simple and relaxed and even playing at hick at times, but there’s a good deal of sophistication to do just this. I enjoyed the gig immensely. The instrumentals I heard were a touchingly beautiful take on Leonard Cohen’s Hey that’s no way to say goodbye as a slow shuffle and Bowie’s Oh you pretty things. The storytelling originals included Suzanne (not Leonard Cohen’s) and Victoria and This train (you rode). Tom Fell joked that Tom Vincent would return the Loft’s jazz cred when he played there the following week, but jazz is a many splendoured thing these days. Music is all just 12 notes anyway (admittedly a simplification) and it’s all merged together these days; all part of the luscious sounds we call music. This is a very attractive and amenable and subtly sophisticated branch. Loved it.