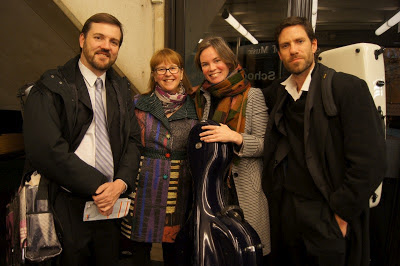 This Canberra International Music Festival was a blast for Megan and me. It’s a different experience to be so involved: more work, more time consuming, a busy house, but also more satisfying and more informed. We billeted James Eccles (viola) for the full festival and Graeme Jennings (violin) for the last weekend. We chatted music and heard strings at breakfast and were close to practising habits. We drove Graeme and Clare Tunney (cello) and others so chatted more. We knew of rehearsals and attended a few and these were interesting in a very different way from the performances. We heard tell of people and challenges and the inevitable minor foibles. We never tasted the soup. The density of contact and concerts taught us of composers and styles and musical history. 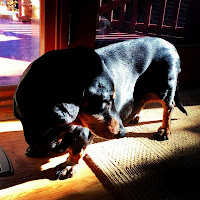 I blogged and attended more than I’d ever expected to, so the Festival took on shape and the creativity of Chris Latham’s (Artistic Director) event became more evident: Canberra the city, its role in democracy, its design and designers, Walter Burley Griffin and Marion Mahoney Griffin, who appeared in a delightful and informative conceit. All this in the year of Canberra’s 100th anniversary and the C100 festivities. The gathering of professional players for the Canberra Camerata Chamber Orchestra and the Song Company and Roland Peelman and the New Zealand and choral and ANU and other local connections. The internationals that thrill with their presence but also mingle and share learning back and forth: Pieter Wispelway (cello) and Paul Dresher (composer, US/California) and his Double Duo and Gavin Bryars (composer, UK). The interleaving of works from the baroque and Bach to minimalism and the modern. The setting of history (Great War, fin de siecle) that was influential at the time of Canberra’s founding. It’s a rich tapestry and this festival explored it with considerable musical and historical intellect. Being a part and attending more than a few concerts lets you appreciate all these themes. Of course, this takes time and maybe that’s why so many attendees were obviously retired.

Looking back, I found little that was disappointing and this actually surprises me. Perhaps worst was the Canberra Times coverage which was almost derisory. For such a high quality and intelligent event, I expected more coverage. Chris Latham had claimed Jesus’ Blood as perhaps the most important composition of the century (he’s always enthusiastic) yet I don’t remember a review. The Sculthorpe premiere got a very limited space as part of one article reviewing 3 concerts. It may not be run with the budget and renown of more famous festivals, but it is clearly run with intelligence and creativity that I reckon would vie with the best. CIMF2013 was a hugely successful event and Chris and the others who were involved can be duly proud. So should be Canberra and Australia.
Posted by Eric Pozza at 7:29 pm