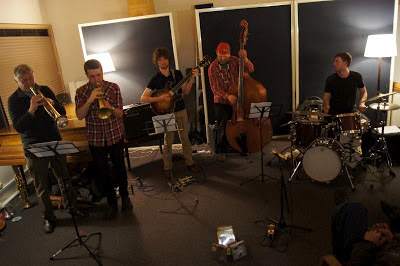 Berlin didn’t come for the C100 celebrations. This was just a home-coming gig for Reuben after a year in Berlin. He was one of a considerable Canberra and Australian contingent over there over recent times. It’s quite a centre of experimental and jazz music these days. Reuben’s in town for a few months before heading off to Melbourne. He was a significant figure in his time in Canberra, and the attendance at this concert is just a confirmation. This was a great concert. I was surprised how comfortably the band settled back in, and also that Reuben hadn’t played with Evan before. You wouldn’t have known. This was wonderful music.

They started with a piece of Berlin art: a 30 minute free improvisation. It’s a demanding form for player and listener but this was easy. The time passed almost without thought. Fluttering trumpet and various noises with or without mouthpiece; ardent drumming with a consistent kick that was so loosely tuned; chordal or single notes from guitar; even or bouncing bow and tonal-centre-free bass walks and clear bass tones. I felt there was a touch of unreadiness to end when due, but this was a masterful display.

Then an interval and doing the rounds for Reuben and the others, then a set of more approachable tunes, from earlier CDs, mostly written by Simon, but also two by Reuben and one from Tomasz Stanko. These were all very well presented and soloed over and they were a very mixed bag stylistically: reggae and jazz and Moroccan and even country touches. Improvised and malleable in interpretation but always with the strongest of grooves. The mix of popular approachability with the jazz skills opens the music to many ears and maintains the substance, even if some of the jokey presentation may disown it. I was floored by the simple beauty of several of Matt’s guitar solos, using chords and single notes, clearly formed and unsustained notes with an edge of distortion, that spelt out inevitable melody that would grace a country lament. Reuben would play with tone and noise then drop into similar lyricism. The rhythms were churning underneath, spelt out by bass and drums, but also by offset chords from guitar. The groove was absolutely steady but implied and richly embellished although sometimes Simon would drop back on a repeating pattern or atonal walk. He only took a few solos, but they, too, would sit relaxed, exploring the highest notes or dropping in a scalar line. Intelligent and tasteful playing all round. Miro sat in for a few tunes, too, so we got his fast exploratory work contrasting against Reuben’s flugelhorn phrasing.

How good was this? Both entertaining with the reggae and the rest and roiling grooves and relaxed but exploratory soloing. Berlin has done good for Reuben, but Canberra seems to have done good for the others, too. Great gig! Reuben Lewis (trumpet, flugelhorn) led a trio with Simon Milman (bass) and Evan Dorrian (drums) then a quartet adding Matt Lustri (guitar) and a quintet with Miroslav Bukovsky (trumpet).
Posted by Eric Pozza at 7:57 pm

Thanks for the review.

A very enjoyable gig I though too! For me Reuben's playing was relaxed and melodic. His playing was thoughtful and nicely articulated and the contrast with Miroslav was very interesting. Simon and Evan locked in on the groove
nicely and Matt's playing was very tasteful. Good work all round.