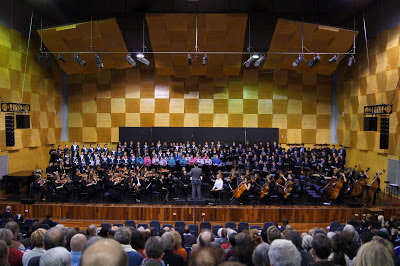 The theme of this year’s Canberra International Music Festival is Canberra, in its 100th birthday year, and the renowned Walter Burley Griffin and wife and partner is planning, Marion Mahoney Griffin. Marion, or her dramatic alter-ego, introduced he concert, Marion’s child by explaining that, although she had no children, she’s proud of their creation, Canberra, and she thinks of all its inhabitants as her children, grandchildren, great grandchildren… I’ve now seen Walter once and Marion twice, and it’s obviously fabulous (as in fables) but also a delightful pretense. For today, there were very many of her great,great grandchildren on stage doing a wonderful job of singing the song of Canberra, for virtually all the compositions had a Canberra theme. 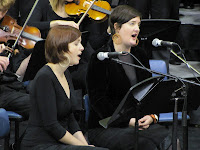 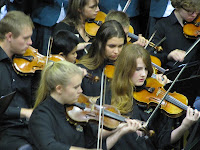 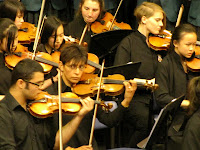 Firstly, Sally Greenaway’s Auróra Musis Amica: fanfare for Canberra. It’s hard for a fanfare not to stir the emotions and the senses and this one did it with aplomb. I was smiling at the beauty of the dawn soundscape to start then lifted by the fanfare and let down gently by the final bars of colour. A wonderful, short piece of considerable success performed by the Combined Grammar Schools Orchestra. Next was Earth song by Frank Ticheli performed by the choirs of Canberra combined Grammar schools and Burgmann School. These are young voices: not powerful but sweet and pure and high, with just the start of male depth. Lovely sounds. Then Canberra by Stephen Leek sung by the Woden Valley Youth Choir (all girls) accompanied by piano. This comprised two pieces: Where to build a city and Canberra Anthem. This was story-telling in music. Amusing chatter led to discussion of Where to build the city (this was an issue just over 100 years back). They ended with the decision “Canberra / the meeting place of ancient times / Where, where where, where / There”. An effective piece of story telling. Then another by Stephen Leek called Landmarks. This sang of Murrumbidgee flows, Lake Ginninderra and The Brindabellas in three movements that was ancient and expansive and spoke to Aboriginal awareness with glockenspiel providing structure, bass drums providing thunder, congas providing rhythm interspersed with harmonised vocal lines in eight note melodies.

Then the big forces were arrayed for two works by Karl Jenkins. I’d arrived earlier to find many schoolkids in uniform on Sunday, mostly eating sausage sandwiches, not expecting a massed kids performance. This is a wonderful little music hall with a large stage and it was packed. About 200 players, including Canberra Camerata and Song Company for the professional guidance, and a raft of school choirs and orchestral players. Chris Latham introduced Karl Jenkins as a Mozart of music for youth”. I could only concur. These were not massively difficult pieces, but they were serious and interesting. Chris had also added words about Canberra in place of most of the nonsense phonemes of the original, so ti was also historically educative. I wondered what the Sydney-siders of the Song Company thought as they sang of Canberra as the Shimmering City, and I felt uncomfortable with the “great city” reference later, but these were very satisfying and even engrossing works done with surprising maturity. The first was The Shimmering city, a major work in 100-or-so movements including the fabulous voices of Susannah Lawergren, Anna Fraser (sopranos) and Tobias Cole (counter-tenor) with Riley Lee (Shakuhachi) and Ji Won Kim (solo violin) with Woden Valley Youth Choir, Canberra Girls Grammar and Canberra Grammar School Combined Choirs and Orchestra and Radford College Choir and Orchestra, and Burgmann College Choir conducted by Chris Latham. The second was shorter, the Song of the Limestone Plains, with introductory voices then claps for the birthday of Canberra the choir then shakuhachi and brass and more, all against what seemed to me to be a cut-time outback groove. Very nice stuff.
Posted by Eric Pozza at 8:02 pm