Win one, lose one 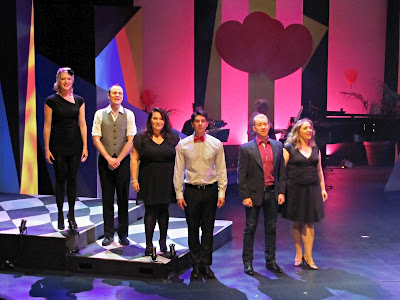 Not everyone did, but I lost on this one. We went to see “I Love You, You're Perfect, Now Change” at the Q Theatre in Queanbeyan. We’d decided on the spur of the moment after overhearing someone at SCUNA saying how good it was and that Lucy Bermingham was musical director (I hadn’t heard her for some time). I should have looked more closely. The promotion had me dreading it by the time we walked in (“After watching this outstanding performance you will walk out feeling that nobody is perfect … and that is OK”). This is an Off-Broadway musical that ran for 5,003 performances (1996-2008) – apparently the longest run of any off-Broadway musical. It runs 2 hours plus interval. It’s a series of skits, each with a song, covering modern romantic (urban heterosexual) life: dating, mating, marriage, kids, divorce, old age. It’s funny, but in an American pop-commercial way which seems somewhat sordid to me. I feel much American humour is humour of denigration. It’s common enough on commercial TV but I don’t like it. There were popular memes, desperate characters, “losers”, stereotypes. It was also somewhat crass at times (condoms; couple with young kids yearning for sex) which is also common in popular culture. I wondered if it’s unavoidable in discussions of mating (it certainly seems to be these days) but then I remember the great era of Hollywood, with its wit and whimsy, that did perfectly well with hints and intimations and was more clever and deeper in the process. This work touches on real themes, but to my ears it doesn’t say much about them. Perhaps the second half is better, where the couples break up, the divorcees rethink their lives and the aged carry on with acceptance and wisdom. It’s not all bad, but I found it hard to warm to it after early disappointments.

But what’s good? The music was varied, and the styles matched the themes, like the single woman singing “Always the bridesmaid, never the bride” as a Country tune. How apt is that. I really liked the cast and their performance. This is presumably a semi-professional group of performers, but they did a grand job. Good to very good voices; well acted, with verve and humour; nicely lit and laid out. Also, the music was good if the orchestra was very small. I wonder if the original was performed this way? Only Lucy Birmingham, on piano, who did most of the work, with occasional violin melodies and a very quiet bass. In all, just 9 performers: three men, three women, three musicians.

I’m writing about how I received it, but not everyone felt the same. I chatted with a woman next to me at interval, and she suggested it’s just a flimsy and (in a nice way) that I could lighten up. Fair comment. I went with Megan and Bob and Anne and they enjoyed it well enough and sympathised with the difficulties of post-modern, urban mating. Yep, I could see that, too. A few blokes belly laughed, especially at the scene of the divorcee doing a video for a dating agency. That had amusing twists, but it was also one of the more honest and heartrending scenes of the show. I warmed to the old man and woman meeting at the funeral parlour (at funerals of people they didn’t know) who got together with the line “I can live with that”. So perhaps you should judge for yourself. Certainly the cast deserves the audience.