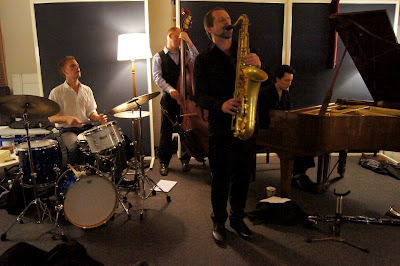 You have to have your wits about you when you play with Tom Vincent. He’s lively, fluid, ever changing. It’s a fabulous experience for the listener but the hot, intense, mercurial ideas that he throws up are a challenge for his musical colleagues. He’ll change feels, go double or half time, ballad to hard bop, polyrhythms to swing, quotes or medleys.

It’s exhilarating and a mark of a musical mind with a rich range of feels and tunes on tap. I’m not sure what plans there are behind this. The first time I saw him was in a relaxed house concert where each set was an extended off-the-cuff medley. Leigh was again the bassist, and Mark Sutton the drummer. Leigh has been the bassist each time since. He’s perfect for this role: satisfying tone and unamplified volume, with a rich repertoire on tap, a strong musical personality, a readiness to experiment and a good natured approach to the ride. We don’t hear this jam-developed fluency much these days. It’s a real buzz. It’s also personal. I can’t help but think of Oscar Peterson and those albums playing for his friends. That spontaneity, warmth, intimacy and as noted by Tom himself, that risk taking, is here too. And it’s always swinging. There’s lots of hard swing here. Despite some rabid dissonance and jagged intervals and zany rhythms, this is deeply underlaid with swing. This is the presence of jazz history. I got that from the hard walks, from Danny’s tone and tremolo and Alf’s driving brushes. Skill that’s influenced by the modern, but richly aware of the swing and pre- then bop years. The tunes were from there, too: standards, ballads, bop, Billy Strayhorn, Bird, Monk. Classic stuff and Tom does it with honesty and a nod to following history. This is rich and challenging and a furious ride and a visit to the great jam sessions. The tunes can be short, although these weren’t all short this night. They can be arranged instantly, bass solo, drums solo. They can end on a dime, unexpected and enervating. Tom was picked for the Opera House and to tour with Wayne Shorter, which he did, but I’ll take his furious brilliance in the small club anyday. Leigh is a constant offsider and a star in the role, not just in his flexibility and knowledge, but in the driving walks and the easy soloing. Saxist Danny is “choppy” (an expression used by a visiting classical player meaning he’s got chops). He certainly is, writhing up front over the tenor, manhandling the baritone sax, but also surprisingly fluid on the bass clarinet and with ne’er a squeak. Again, like the jam session, there’s a touch of competition between Danny and Tom: Tom responding to Danny’s solo lines with florid fills or comping with tangentially rhythmic chords. Along with Leigh, Alf is a steady hand, frequently playing brushes with time-honoured grooves, soloing so as to spell out the melody. There’s a rich history here, great chops, dangerous risks. Tom is always a blast. Fabulously entertaining and this night for a surprisingly suited crowd. Apparently they’d visited a Tassie Senator in Parliament House in the afternoon. She must have been at the Budget, but it looks like her office came to the Loft. Nicely done. Spreading the word. A blast as always.