A confusion of Eubanks 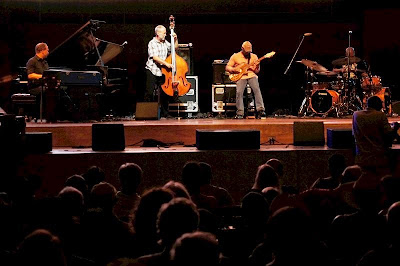 I heard Dave Holland once before and he was playing with a fabulous trombone player, Robin Eubanks, so when I saw Eubanks on the program I remembered him. But this was Robin’s guitarist brother Kevin Eubanks and the band was Prism and the music was immensely other. Prism was also having its first outing at this Chicago Jazz Festival. They comprise guitar, piano, bass, drums and they play jazz rock. Very, very different. Dave may have introduced the band as nominal leader but the sound clearly functions around guitarist Kevin.

He’s brash and loud and driven and always on the edge of feedback and he uses it as a sound. He’s rocky or fusionesque or soundscapish rather than jazzy. The notes are not the thing; the effect is, and it’s an outlandish and extroverted and fun thing. The energy is high; the volume is high; the harmony is low. There was some of each these but this is essentially a music of grooves and rock-intensity. Dave played a few solos, and on double bass they were impressive outings but they could not help but be quieter and more jazzy. Drummer Eric Harland played a few solos and these seemed to be a bit strained as he searched for an authentic response to the urgent guitar, but this was the first gig for this band so they are presumably finding their feet. I hardly recall the role of Craig Taborn on Rhodes and piano as I write this a few days later although I do have notes for some decent solos. I could appreciate some of all this but I was underwhelmed. I thought of leaving early; too loud; too brash; too little change. I wondered if Kevin was faking it but I was wrong, of course. You can’t use jazz guitar chops as the model for this style. This was predominantly chromatic and strummed and sound effectish. Consonance or dissonance or even harmony were not the issue. Some left early but others took the opportunity to take their seats. The woman next to me, not alone, stood for ovations during the gig. I was underwhelmed although somewhat interested. Maybe it’s just that my rock days are behind me but this was very much ROCK[jazz] to my ears.