A notable confluence of pollination 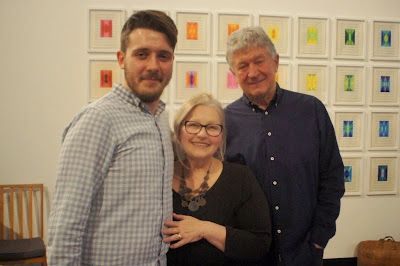 It was called Inflorescence and it was in the Drill Hall Gallery and it was a merging of two arts from one family. Or perhaps two families, because Miro was a ring-in. Reuben Lewis and Miroslav Bukovsky were performing in response to an installation developed in contemplation of pollination by Reuben's mother, Dianne Fogwell. We all know of the crisis of bee populations, more in USA than here, and in a strange concurrence, I had come across a group promoting the issue only a few hours before at the People's Climate march.

Dianne's presentation was in white, lit in the semi-dark from behind by LEDs, combining a range of flower shapes and seed linocuts and a lengthy white sheet with indents in the form of staves and music. Reuben and Miro walked along the sheet and through the installation playing trumpets or other, tones altered by mute or tongue, melodies performed and improvised from snippets of the sheet's dots or just interacted by improvisation. Trumpet seems so right for such a performance with its varying tones, controlled attacks and holds and decays, flittering wheezes and slapping valves. These two players understand each other; they were once master and student. Their sounds are rubato, searching, floating, but sometimes setting rhythms or regularly repeating melody and variations. It was only after the concert that I noticed the long white sheet was dotted with staves and notes. It is only now, thinking back, that I grasp the representations of flowers and seed pods that comprise the pollination process. I remain uncertain of the meaning of the long sheet with its musical indents but perhaps it's a portrayal of von Frisch's waggle dance. Whatever, the installation may not need much interpretation and the music certainly doesn't given it's the most abstract of the arts. But this was mesmeric, intuitive, responsive music. Two musicians of high calibre responding and interacting with art and environment and each other.