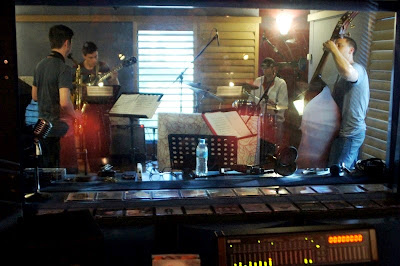 Shorty & Chow recorded a live broadcast for ArtSound the other day and I was there. It's a while since I've caught Chris Deacon and his Friday Night Live broadcasts. Secret: they are sometimes recorded in the afternoon and broadcast days later. But the playing, the chatter, are live and the effect is live. That's what matters. I caught the first set and Shorty & Chow dropped in to balladry with Luke's dedication to a venue in Newcastle, The Terrace, but it was mostly funky and driving with rock drums and effected, echoed Abercrombie guitar and syncopated bass. Nice. Chris was showing his headbanger side and we were both rocking away in the control room. This was fun, tight, with sharp drums and searing guitars and solid grooves and that alto playfully over the top. Scranky was the name of one tune, and Pignose and Dancing with Gertrude were names of two others. It fits. Dirty, driving, guys' music, a bit impolite, but fun and involving. Takes me back. Shorty and Chow. Enjoy a touch of misbehaviour. Great stuff.