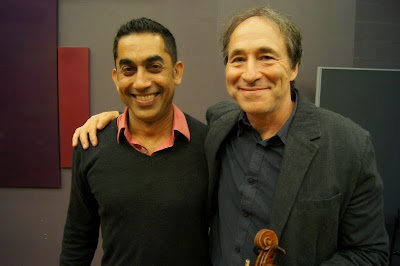 I missed the Australian Haydn Ensemble but not the associated masterclass. The two guests with the AHE were Marc Destrubé (violin, Canada) and Neal Peres da Costa (keyboards, Sydney) and they ran the masterclass. This session was open to the public and I can only suggest that any interested listener also attend. This was not just for the performers. This is exposure to advanced musical thinking and I learnt tons. Students from the School of Music played five pieces over 2 hours and received comments and guidance from Marc and Neal. Nothing negative; nothing on occasional mistakes. This was mostly on interpretation and improvements were evident even after just a few minutes of guidance from a trained ear. Here are a string of quotes to give you the idea. [When practicing] "don't always start at the start" [so you learn the whole piece]. "In Mozart's time they played only new music" [so recognise the shock of the new in established music]. "Mozart was primarily an opera composer" [so think of the characters, the contrasts, the speech].

Read performance treatises (CPE Bach, Daniel Torke?) on the meaning of the slur and more. "Phrasing marks duplicate speech". Start with the traditional approach of first beat as dominant if there's no other notation. Your Steinway is "much stronger than anything Mozart had", "think of lightening up", use "lightness of touch" [for Mozart's music]. A repeated note probably means it's more insistent. "Trills serve three functions: add tension, remove tension, or decorative". [In the duet,] the piano is the harmonic instrument: "hear ... the most wonderful blackboard" [did I hear this right?]. When phrasing, "keep tension in the silence". "Be aware of function [contours]": in a duet, who's leading, who's following and when. "Read what people say of G major and any key". Practice playing a lighter sound; strength will come in performance. In the Romantic period, pianists almost always played arpeggiations [in place of chords?]; it's more vibrant. Crescendo with slight acceleration gives energy. "Use imagination to give shape". "Pace the energy" [leave have room to increase volume, etc]. The Romantic period used "lots of markings"; ask why. Scarlatti sonatas are "often from some form of dance"; his chords are "fantastic ... make sure we hear them". Music may be metronomic but still needs "energising". "Early music tries to make difficult [passages] sound difficult; new music tries to make difficult sound easy". "Often, if technically we need time, the music also needs time". "The bass line is the driving force" and "look to the rhythm of the bass line". "They didn't write slurs in the [Scarlatti's] time, because players would have played this way". "There are only four tools of expression in music". [I struggled to catch the four tools. I think they were: weight, articulation, colour, speed]. "Dance is about going and stopping". There was more, especially in the context of each piece. My main takeaway was think of the form and how to play each note or phrase. Also, think speech; imagine the conversation. This was a fascinating two hours. You get the picture.