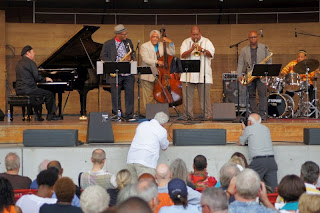 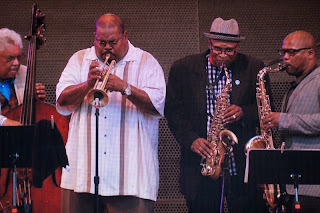 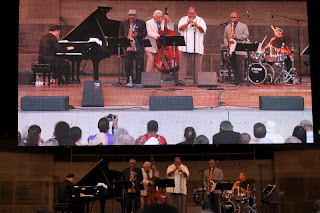 The Rufus Reid books (Evolving bassist and Evolving upward) were the main tutor books in my bass life and presumably the lives of many jazz bassists, so to see he was performing at the Chicago Jazz Festival was a moment of great excitement. It’s different from the pages of a book and perhaps more so than a video. Suffice to say I was not disappointed although I was surprised by some aspects of this gig. Rufus is now a bass veteran, firm, confident, in the back row but key, as composer, leader, formidable hard-bop driver and player and front row member when laying down unison lines with the horns or taking his own solos. These charts were sometimes contorted, frequently complex and of odd times. I think I counted Hues of a different blue as 4-5-4-7 but I’m still not sure. The playing all round was great. Solos were passed often between players, so at least the front line tended to all solo on each tune with reasonably short solos. Alto Bobby Watson was the most at home with Rufus, concentration relieved with smiles, but they all looked comfortable even if they were obviously working to read a few of the charts. And they were all reading, even Rufus for several of the more contorted melodies. Great, driving hard-bop with rich arrangements and interesting changes from some expert players. So what’s surprising here? Firstly, Rufus’s playing, which seemed so magisterial and relaxed and which he seemed to do with little left hand movement. I put this down to pedal but mostly to sly use of leading notes, so a rich chromatic take on the bass lines was just a middle finger away. Lovely! This is how the seasoned pros do it. Secondly, how these guys milked so much music from essentially a tonal take on the changes. I first noticed with Bobby Watson, but the others did this too. Their sense of melody overlaying the changes was magical and informed with profound comfort with the scales and arpeggios that are the building blocks of all this. The lines just flowed; the changes just passed but the musical themes moved through them with incisiveness and ease. I noticed some dissonance later so it was there, but invention was there without it. I remember John Mackey correcting my hearing of his playing once, that it was essentially tonal. It shows how closely you have to listen. It was just piano played with considerable dissonance and the first time I noticed this, it was in the left hand against a tonal right hand. How interesting and so much to learn. They mostly played originals from Rufus’s recent album/s: Glory (contorted heads and odd resolutions), When she smiles upon your face (medium latin AABA arranged with a march as feature), Ebony, The eloquent one (dedicated to Hank Jones), Hues of a different blue (with that odd time), The drying blues (hard bop F blues with a melodic twist by Eddie Harris). Rufus played with Eddie Harris and a string of others (Stan Getz, Art Farmer, JJ Johnson…) and studied classical bass and is famed as an educator. He deserves the confidence of his senior statesman status and he certainly looks it on stage. Just a great, hard driving performance and classy musicianship.

BTW, a recurring theme of this Chicago JF is Joe Segal and his very longstanding Chicago venue, Jazz Showcase. Early in his career, Rufus Reid was resident bassist at the Showcase, so this was also a return to known turf. And not just for Rufus, but for several other players. Chicago laid claim to 60% of the performers at this festival.