With NYC outside my window 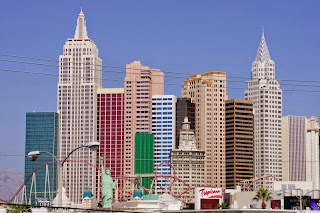 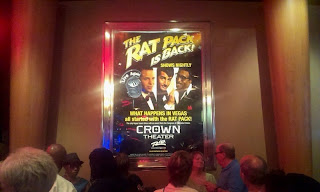 Our last night in Vegas. I’ve adjusted if not warmed to the place, but I have to admit I loved our last show: The Rat Pack is back. It’s essentially a tribute show to Sinatra’s Rat Pack through recreating a notorious, hugely successful three week season at the Copa Cabana in Las Vegas in 1960. Sinatra, Dean Martin, Sammy David Jr, Joey Bishop and Peter Lawford were the Rat Pack. They were named by Lauren Bacall, wife of Humphrey Bogart. Lawford was brother in law to JFK and Marilyn Monroe makes an appearance, at least in this show, for a notorious Birthday song. They were in Vegas to make a movie and they partied and performed for three weeks and it became a signal of a new generation of cool with reference to race and aspiration and post-war experience. It’s an intriguing story and now dated, but with residual meaning. But it was also a musical feast. These are not the originals, of course, but I could still search for that sense of timing that Miles sought in each new Sinatra release. Or compare the three voices or the songs they sang. Or just feel drenched in the lovely swing of a decent 9-piece band (alto, alto/flute, tenor, 2xtrumpet, trombone, piano, bass, drums). Or experience the closest I’m likely to get to an experience of this era and these personalities. Some jokes were lame and plenty were out of sorts in today’s world. The sexuality was something my kids wouldn’t even conceive of, in these unrestricted days (think panties humour), and the ethnic quips were perhaps marginally acceptable given the background of the Jew, two Italians, a Black and an Englishman who uttered them. It’s all out of time now, but the audience was old enough to recognise it. Marilyn appeared for a visit to the audience to harass some man and his wife and to end by recreating the classic vent-blown dress scene. I still don’t warm to Sinatra but I could deeply enjoy his music. Sammy Davis Jr was the straight man justifying a position for his race, and Dean Martin was the drunk Italian with the lovely Neapolitan repertoire. Someone told me after that he actually didn’t drink, on stage or otherwise – it was all show. This era was like that. Dangerous and brazen and I wonder to what degree it’s influenced modern USA. Whatever, I may still see Las Vegas as one type of cruise or another, but as I write this with a view of (faux) NYC out my window, at least I can say the shows are good. I really enjoyed this and the dry martini to finish the night was just all part of this strange miasma which is this era and this place.
Posted by Eric Pozza at 2:05 pm

Email ThisBlogThis!Share to TwitterShare to FacebookShare to Pinterest
Labels: Las Vegas, Rat Pack is back