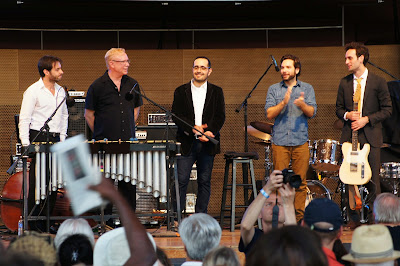 What I noticed about Gary Burton was just how unforced was this music of his New Quintet. Gary himself plays a straight but wonderfully capable style, easy, consonant, fluid. You feel every line is as you’d expect and as you’ve heard it before. For me this is mainstream. The lines are right if a little unchallenging but as a muso you realise they are not easy to play, of course. There’s immense practice and skills to do the expected. He played with a young band of internationals: Ukraine (piano), Peru (bass), Puerto Rico (drums) and … California (guitar).

Young guitarist Julian Lage also had this unpretentious style, blues-rich and slow-hand. He did occasional fast, dropping in a few flourishes, but mainly this was slow with each note felt. This was neat playing, easily comprehended and very presentable. Both Gary and Julian smiled frequently and looked encouragingly at the others. Pianist Vadim Neselovskyi also stared at the others but his style was none so overt. His solos were very different, to my ears they were a classical crossover, and mostly classical: polytonal, polyrhythmic, poly-everything. Just once or twice was there a right hand sax-line line; this was full handed explorations that veered way off track but recovered in resolutions. No surprise there from the Ukrainian of the band: I always imagine East Europeans are the remaining stalwarts of classical training. Otherwise, the band was bassist Jorge Roeder, again understated and tutored. Drummer Henry Cole displayed some tortured facial expressions but his playing was responsive and his solos were very satisfying dissections of the rhythm and explorations of drum tone. The quintet played originals by various band members: Late night sunrise by the pianist, The Lookout and another by the guitarist, a tango dedicated to Piazzola by Gary, another one or two and finished with a relaxed blues on Bag’s groove. Finally, Gary Burton was given two awards by the Jazz Journalists Association, for his vibes playing and for the best jazz book of the year, Learning to listen / Gary Burton. Clear and evident playing meets classical improv.