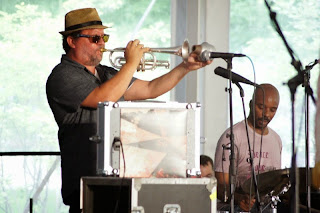 Two short visits started my day 2 at Chicago Jazz Festival. Neither visit did justice to the performers. CJF had two large tents as well as the major stage. The Jazz & Heritage Pavilion was the stage for the Chicago Underground Duo. There’s a long-standing underground and experimental music scene in Chicago. Rob Mazurek was playing trumpet as I arrived then moved through bamboo flute, wordless voice and African percussion, all the time managing something electronic, presumably a laptop, while Chad Taylor drove and coloured on drums. All this was embedded within bass and other recorded sounds and echo effects. Loud and convincing and well received. 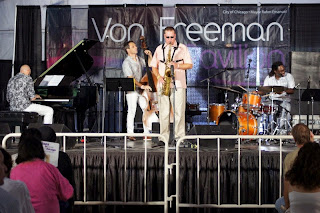 The John Wojciechowski Quartet was a more traditional jazz outfit playing in the Von Freeman Pavilion. Tenor, piano, bass, drums playing a ‘70s style jazz. Nicely dynamic with accents, pedals, swing and walks, unison punctuations, and some satisfying solos passed round. Attractive modern jazz played for a large and willing audience. I was amused by the counterpoint of blank-faced bassist and beaming drummer. It’s actually been quite an education to watch musicians’ faces at this festival. Quite a few smile and often they are the ones closely watching each other; some are bland and distant; some pull quite odd faces. Perhaps it’s the huge screen over the mains stage and the intimacy of TV projection that raises this as an issue. But my impression is it’s best to smile, at least to engender participation and empathy in the audience.