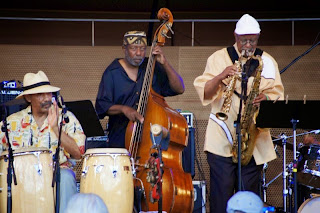 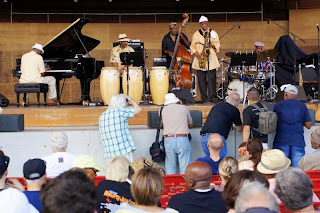 Ari Brown played at the first Chicago Jazz Festival and this is the 36th iteration, so he is a veteran. Apparently the band, too, is longstanding. This is unpretentious, honest, true music. Bassist Yosef wore a colourful African skull cap and this places the time. So does the simultaneous harmonies of tenor and soprano a la Roland Kirk. Steady grooves with bass that moves but holds, meditative, lyrical, eddying percussion. Ari’s solos were strongly voiced (he’s a Chicago tenor and they have a tradition of big tone), uncluttered and lyrical. His pianist brother Kirk spoke from this same era, again simply and honestly phrased. Bassist Yosef stood warm but inscrutable, holding steady latin-like grooves, subtly enlivening them with fifth and octave patterns. I enjoyed percussionist Dr Cruz staring blankly to audience as he developed intriguing but understated polyrhythms in his solo and otherwise and the interplay with drummer Avreeayl was a pleasure. They played the range of this style. Wayne’s train was a dotted quarter note octave bass obbligato; One for him was a dedication and a medium-up walking blues; Freebop for Mal was another dedication written by Kirk; Inca was another latin feel; they finished on a lovely take on Sophisticated lady. To some degree it’s my preferences (this is close to some of my formative Africa-rich albums including Norman Connors) but this was a great pleasure to me. To my added pleasure and surprise, they received a standing ovation, so it’s a music that’s loved by many. Just unpretentious and honest music from the veterans.