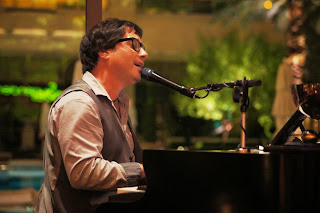 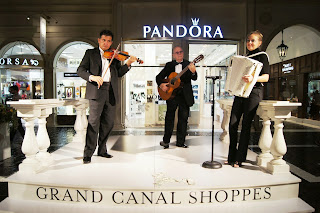 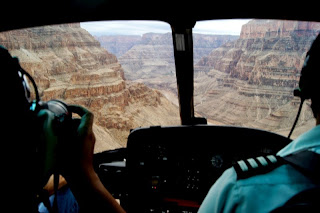 We’re here in Las Vegas. It’s a strange place. Not much in the way of jazz (despite a metro population of almost 2 million). We saw a show, Jersey Boys, and it was very well done and I enjoyed it with the songs and that falsetto and those harmonies despite a strangely disjointed script. (I’m told this is because the musical was developed from the recollections of each of the Four Seasons so moves through their points of view). I thought of Michael Azzopardi who was playing in the band for the show in Australia. You must have had fun, Michael. I found a page for the local jazz society and “jazz legend Gus Mancuso” was playing but the dates didn’t work for us. That would have been interesting: he played bop on a baritone horn (not bari sax) and had two LP releases in the mid-’50s and was promoted by Cal Tjader. Otherwise, we walked the glitz of Las Vegas and looked at blank faces and shorts’n’thongs and overdressed young girls. I expected there would be plenty of buskers (no, just beggars) and musos in bars (no, very few live musos but much piped dance music). Here are pics of a trio in Piazza San Marco (but without campanile or even a church frontage). I heard an Asian female gondolier singing quite beautifully. We were off to hear a Rat Pack tribute singer fronting a trio in another casino. The program was changed and we got piano man Dave instead. He was good but didn’t sing much of the “old stuff”. Maybe we didn’t tip enough: it’s not something we Australians understand. His field was Elton John / Billy Joel territory, although he extended to classic rock and Neil Diamond and John Denver and Georgia and Fly me to the moon as oldies. I really admire these guys with decent voice and piano and stage presence. His repertoire didn’t reach to Stella but it was large nonetheless and he entertained well. The best of Vegas for me was the helicopter ride out … to the Hoover Dam and Grand Canyon, landing half way down a canyon that’s virtually a kilometre deep. Difficult to comprehend, but the GC gets deeper than this. This is Nevada and it’s an arid place, surviving on the Hoover dam and they say that’s losing water. Our pollies deny all that, of course, and it will probably fill once or twice again before it’s finally parched, but I wouldn’t voluntarily choose that path. Las Vegas is not really so strange. It’s just corporate consumer capitalism at its apogee. Or like an oversized stranded cruise liner with mega cabins. It’s strange walking narrow footpaths over long distances in searing heat next to 8-lane highways then escaping into huge pomo-ironic spaces filled with gaming and brand-name shops and faux lux (knowing the real luxury is a few floors above). I’d just heard an author being interviewed on National Public Radio here and he spoke of his new book about a person stranded in Dubai (The dog / Joseph O’Neill), "a place you could enjoy if you liked having maids and spending your time in swimming pools and shopping malls". It resonated with me, here, in Las Vegas.
Posted by Eric Pozza at 2:02 pm