Worthy of the bigger tent 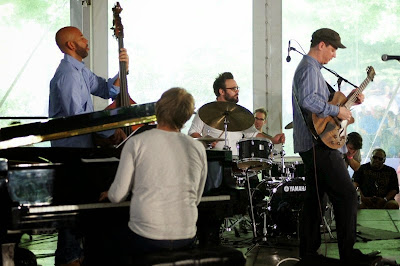 Even the MC bemoaned that Kurt Rosenwinkel didn’t make the main stage. Instead his quartet played a set in the Jazz & Heritage Pavilion. It was hot and sweaty and full with perhaps thousands. These are truly big marquees for big weddings! This is my third listen to KR and I am still unravelling his reputation. Guitar is not always my favourite instrument, but I can see his immense capabilities. Synth effects are not always my favourite sounds, but I could enjoy his presumably-midi driven analogue synth tones and slow attack envelopes. There was even a friendly harmonium-tone for one solo.

He’s fast; he’s wonderfully easy with his lines; he plays huge phrasings and ends them with the most glorious of dropping lines; he can play unexpected intervals and extend them with ease over three octaves; he mixes finger picking and picks; he plays with slurs or soft unattached tones; his sequences are of all manner and immense capability. I heard all this and drooled. Similarly for the others. Aaron Parks was playing a more straight jazz effort than when I heard him a week or two before with his own band. Eric Revis was eminently firm and drummer Colin Stranahan took several solo outings with verve and force. This is not music of great dynamics and perhaps not of great humanity. I felt a steadiness and consistency from streams of notes and steady drive rather than crescendos and variation. I thought of the visual age and film and Pat Metheny. They played an easy latin feel over 16 bars, a samba with a beautiful guitar solo intro, a dotted feel, a 3-feel over 16 bars, they ended with a 6-feel that was welcomed with applause, obviously well known. There’s clear mastery and some clever twists. I drooled over the playing and was immensely happy to hear this show but remain a little untouched, so I’m still searching for the heart of Kurt Rosenwinkel after 3 gigs.