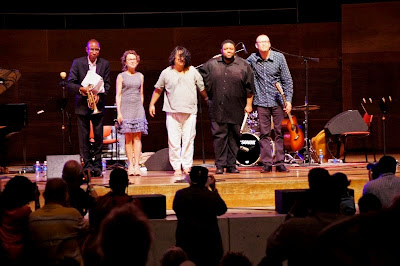 My body loves hard bop but my soul loved Myra Melford’s Snowy Egret. Myra grew up in Chicago, lives in New York, plays with Henry Threadgill, teaches at UCB, is influenced by Don Pullen and Cecil Taylor and speaks with accents of classical, blues, free jazz and more. I found this a deeply satisfying set. It was simpler than the clever, earthy contortions of hard bop; more minimal but rich and expansive. Tunes merged. They played just three numbers, but the first was a medley of three (Promised land, Virgin of Guadeloupe, Kitchen).

Hypnotic melodies would arise from dense expanses of transmuting colour. The drums would writhe with density and busyness, accompanied by rhythmic, little-harmonicised fretless acoustic bass guitar. The clear, punctuated classical guitar played a contrapuntal lines or soloed with mutating harmony over an urgent foundation. Cornet and guitar were similarly clear in intent, both wonderfully lyrical and exploratory. I was deeply in admiration of both these players, calm, seeking, overtly honest in their task. Myra established this as leader. She also spelt melody with clarity and intent (on piano and once on melodica). Later, she did a playful take on boogie-woogie and stride but she obviously had ability and love for the esoteric and dissonant. More than once did she raise the pitch and descend to hands and elbows and tone clusters and free abandon. At this, she was a master. But what I liked was that this was not someone who plays only free but a trained performer who chooses free at will. And the abandon was infectious and accepted: she raised great applause from this audience. As for the music, there were dotted syncopations, there was a light 8-feel, there was stride and latin, there was rubato. To my ears, this is truth in music, learned but unrestricted, challenging but inviting, training used for purpose. Sublime.