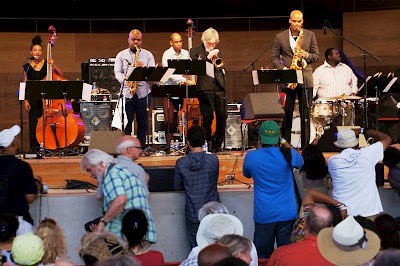 Tom Harrell was clearly held in very high regard. I knew of him but didn’t know him, but now I also hold him in high regard. He composed and led a sextet with alto, trumpet, tenor front line and 2 x bass and drums rhythm section. Obviously, the combination of two double basses without a chordal instrument is rare and to note. Esperanza Spalding as one of those basses was also to note and from the video feeds, it was noted. Tom is obviously not well, stooped and shaking, but his writing was impressive and deep and his solos were interesting and well built. I was taken by Esmeralda who did wordless vocals and bass, including some very capable solos well up the neck. I was also admiring of other bassist Ugonna Okegwo who took on most solid backing duties and played with a firm hand.

There were solos from the various horns and several passages that devolved into collective improvisation. Jaleel Shaw on alto really impressed with several evocative and speedy solos. One thing of interest was how all the soloists approached their solos similarly on the same song, but then played markedly differently on another song. So there was a shared vision of each song and each song had its own vision. This is one nice ensemble. Great playing from Wayne Escoffery on tenor and steady, malleable playing by Johnathan Blake on drums. Obviously, the way the basses worked together was of much interest. Ugonna tended to do the majority of the traditional bass work, especially as Esperanza had another role as singer (for a ballad in French) and wordless vocals for several other tunes. She sometimes combined vocals and bass. Against solos, they would play consecutively behind each horn, so when the soloist changed, so did the bassist. The two basses played a unison obbligato for one tune; for another, Ugonna took the low parts with Esperanza playing two-note chords an octave above; for yet another, they improvised in different octaves, Esperanza above. It’s hard to avoid a comparison. They were both good players: perhaps he with firmer technique in traditional roles; she with more lyrical solos onto thumb positions; both impressive. The tunes were not introduced but were presumably compositions by Tom Harrell, including that French ballad (truly beautiful), a contorted bass obbligato played unison by two basses with slow melody over, a rollicking hayride tune, a glorious trio of two basses and flugelhorn, a blow with long repeated octaves from the basses. Beauty but also iconoclasm and invention. Great compositions and arrangements played as genuine ensemble works by an intriguing line-up.