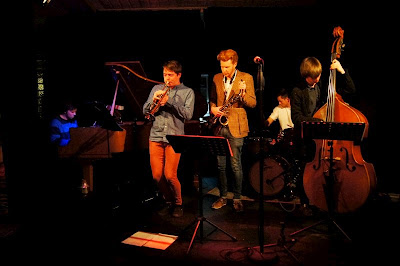 Composition is key to me. I love the standards and they are a great pleasure and terrific vehicles for the individual statement that is the solo but original compositions are special. Calum Builder presented his quintet at Smiths and the music was all freshly composed, virtually all by Calum but one co-composed with pianist Tate. I heard references to floating Coltrane and Jazz Messengers and '60s/'70s so it was grounded in history. This is not music that's unexpected. There are comfortable and satisfying references but it's an individual statement none-the-less.

I was impressed. They played 8 charts, including a "suite" (Calum doesn't like to call it that, but he forgot to offer an alternative title) which extended for 23 minutes and ran through a series of conceptual segments. The other tunes were shorter, perhaps 8-10 minutes, often with a core of obligato bass groove and passed solos. The heads were nicely stated by trumpet and alto, or sometimes just by sax or by piano and sax. Tate provided introductions and solos of deep intent and exploration and I'm trying to place the fabulous comping. Tate is noted locally for good reason. I liked Brendan's bass. I've heard it described as melodic by a respected source, and he certainly impressed me with a freedom over bars and through chords. The whole band was a little uncomfortable to start, but settled through the first set and were sitting comfortably into that set. It says nothing to give the titles - Serpent or Narcissus or My Lord or Nebraska. I really enjoyed a beautiful ballad dedicated to Bernie McGann, What if I called again. Apparently Calum spent considerable time on the phone to Bernie. Tate's floating introduction to Narcissus with a backing of bass octaves on 1-3 was lovely. Despite his busy accompaniment, Sean's drum solos surprised me when they stepped out. Eddie provided trumpet parts for heads and laid some effective solos, even hinting at New Orleans in the first blues. This was some capable writing, some superb piano, and when the band settled, some effective ensemble work.