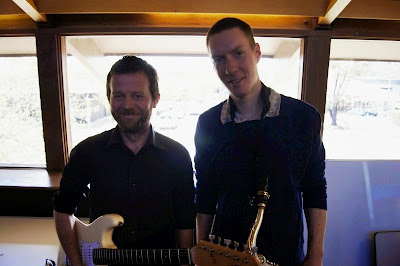 Back to the habits of Canberra. This one is the U3A Jazz Appreciation Group. Most meetings are listening sessions led by members but they include occasional small concerts. This one had a set by Tom Fell and Lachlan Coventry. Tom and Lachlan have frequented this page often enough, but this was a more intimate and exposed performance than usual. Just two players in a small and quiet room with ~20 listeners just after morning tea. They played standards: Alone together, Out of nowhere, Body & soul, a slow burning blues, Softly, Blue bossa and an encore on Have you met Miss Jones. This is stock standard local jamming repertoire but how nice it was! Tom with his big tenor tone playing neat and exploratory from the Lenny Tristano school: West Coast cool, less blues wails, seeking newness by avoiding habits in every line. Tom mentioned Warne Marsh as a recent influence. He also played baritone sax on Softly. Lachlan laying down chordal comps and bass lines then dropping into totally exposed solos with no backing. He mentioned Tal Farlow as influencing some of his voicings. They concurred on a common interest in the blues as the essential foundation of American music. There were questions from audience and much enjoyment. This was total pleasure and, especially given the intimacy and exposure, quite inspiring. Lovely, unpretentious but much prepared playing from two of our local professionals.