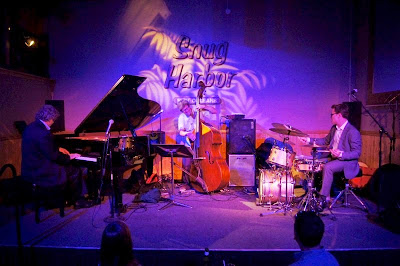 We are in New Orleans and there’s a real sense of history, not least of jazz, and the tourism around it. We were out to dinner and jazz in Frenchmen Street. It’s just outside the French Quarter but it’s a renowned street for jazz and bars and the venue we went to, Snug Harbor, is known as a decent eatery and more contemporary jazz venue. The band this night was a piano trio led by drummer and they are playing each Tuesday for 5 weeks prior to a Blue Note stint and a tour to Japan. I imagine NOLA is in the thick of it, as they chatted of the loss of a local performer and recording with Chris Martin of Medeski Martin & Wood (just confirmed given Delfeayo Marsalis is playing at this venue the following night).

The trio was led by Stanton Moore on drums, with James Singleton on bass and David Torkanowsky on piano. They started driving and punctuated with drum solo then a hard swing. There was a real sharpness and accuracy and a sense of history of the music. NOLA is drenched with historical jazz sounds (as I was to hear later in the night) and Preservation Hall and heavily-blues influenced pianos and it showed here. This was not so much complex or clever musically; it was sharp and correct and basically tuneful and scalar and harmonically easy. Not a lot of substitutions or complex polyrhythms, although there were some dissonant sequences later from piano. David sat pretty still but Stanton would writhe on this drum stool at times and James was tastefully fluent in his soloing if physically and facially contorted. It’s the jazz image, I guess, of commitment to the art. But I did like his solos: melodic, nice intonation, some extended country-like slap, loops under bowed solos. Committed but not so much urban contemporary. I put it down to being products of a long and strong local tradition. Stanton was somewhat the same: strong drumming laid straight and firm. David was a little different, sounding of McCoy Tyner fourths combined with long scalar runs, and just a dabble into dissonance later in the set. I’ve yet to see much NOLA music and I won’t do it this time around but I’m getting the feel of tradition and roots already. My walk home will just add to that.