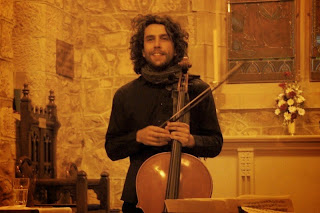 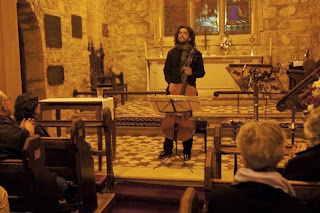 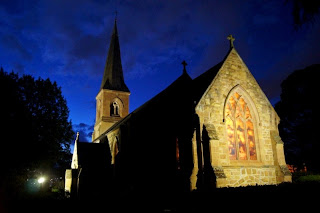 How strange that I heard two performances of the Courante from Bach's Cello Suite no. 3 in C major on the same day. First was at the ANUSoM masterclass. The second was that evening when Anthony Albrecht played at St John's Anglican Church. Anthony was touring a solo performance called Bach to Bush as a return to Australia after studies at Julliard Music School in NYC. Enough said; this was a masterful performance. Anthony studied historical performance at Julliard, aware of the practices and instruments of the era, performing with gut and baroque bow. He said the bow's lighter, for niftier playing. He'd need it. I can think of Bach as ordered, even, but the suites are much freer than that; incredible explorations of harmony and purpose. Anthony played the third (C major), the second (A minor), the fourth (Eb major), the first (G major; prelude only) and an interesting interlude with Chaconne a basso solo by Giuseppe Colombi. The technical feat of the suites is there, of course, with rapid lines and double stops and exposed intonation. Watching his fingers, stretched for performance as they may be, is a massive pleasure for a string player. Watching the range and expression possible in a cello is a massive pleasure for a bass player. Cello is often cited as peoples' favourite stringed instrument. I can understand, with its expressiveness combined with depth and fragility. And Bach and the cello suites hold a special place in the repertoire, with great players known for their recordings. Wispelway played the suites in two concerts in Canberra a few years back. Anthony has studied privately with Wispelway so this is firm continuity. This was a performance of individuality and learned awareness. I sat back to marvel at the beauty, the skills, or closed my eyes to appreciate the genius of Bach's invention. It was only later that I thought of the concert in terms of orchestral or solo playing. An orchestra can be big in sound and varied in tone but written music and the conductor's baton can never capture the complexity of the individual response, so the solo is unique in its communication and Anthony did it proud. Anthony's off to London and further studies but he has family in Australia so he'll return every so often. For that be thankful and take advantage if and when he comes through Canberra again.