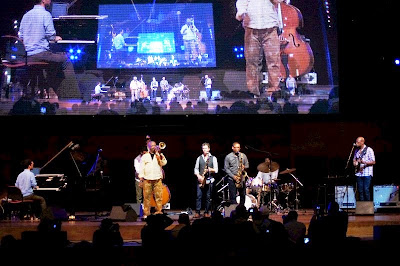 Terence Blanchard was one of the young guns and a member of the Jazz Messengers. He, too, played at Jazz Showcase sometime in the ‘80s and this, too, was a return to Chicago for him. That was well received. Terence and the band were well received. There was plenty of virtuosic display on show; actually, tons of virtuosic display. For this show, Terence’s offsiders included Lionel Loueke and Ravi Coltrane and the rhythm section was led by Fabian Almazan whom I missed at Village Vanguard in the last week or so. Fabian was getting rave reviews.

But that was something different, with string quartet and other. This show had the flair and confidence and virtuosity and neatness of CTI or perhaps Miles strutting the stage. They played long tunes; their solos were long and incredibly capable; the tunes were neat but more a vehicle for the individuality of the blow; the solos took off with verve and incredible ability. Maybe they took off too quickly for comfort or blew with inconceivable intensity. Certainly Terence bent over with his intensity. Ravi was less the showman but did some of the same. The drummer worked and sweated. I felt Lionel build more gently into his fingerpicking that seemed almost incredible with its long intervals between thumb and fingers. Fabian, too, developed more slowly and seemed to my ears to seek out a more inventive improvisation. They were excellent players, all. I’m sure they knew it; Terence seemed to know it. He’s not quite the young gun anymore and he’s probably hotter than then; at his peak. He’s certainly hot, bending and strolling and blowing fabulous lines with a thickset tone to die for. But still I was left wanting. Much ado? These are obviously great players, I remind myself. That’s what I took from this: great players. The audience loved it, but it left me wanting more. A bit too much sound and fury for me.