A history in brass 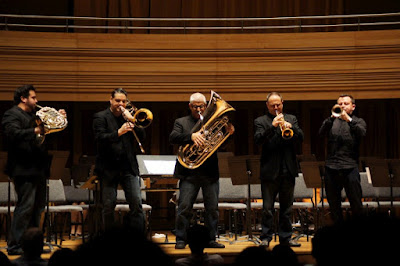 A brass orchestra is a thing of beauty but not often-enough heard, at least by me, all rich and sonorous and smooth and intricate with orchestral complexity at its best. Boston Brass was the next great pleasure of the Performers(’) present symposium at the Yong Siew Toh Conservatory of Music in Singapore. The five members of Boston Brass combined with YSTCM staff and faculty to perform a fabulous evening of brass works, heavily influenced by the American tradition and especially jazz. This is a band to bridge gaps.

In fact, some commentary on the way spoke specifically of that: that musicians move back and forth through styles; that they practice “backyard ethnomusicology” (perhaps paraphrased as “do what you dig”). So we were introduced to a seriously good trom player, principal in the local orchestra, who played the solo for a Wayne Shorter tune, and we heard of BB’s tubist picked up by Duke Ellington to fill in on tour for a few months in his twenties and his later two years with the Ellington Band under Mercer. There was a touch of classical here, starting up with three increasingly lengthy fanfares, from Howard Hanson (for the Signal Corps), Bernstein (for JFK) and John Williams (for Fenway). Then a passage through US musical history. Copland’s take of the deliciously simple Shaker song, Simple gifts; Joe Avery Second line, an improv-rich take on New Orleans marching bands; borrowings from two suites, Gershwin Porgy and Bess and Bernstein West Side Story (I had just revisited WSS in flight and marvelled again at the music and the film); John Lewis Three little feelings (third stream classical/jazz crossover: never enough spunk for my ears); Wayne Shorter Aung San Su Kyi (to touch on modern jazz structures); another suite of Duke Ellington tunes. There’s a sweep of American music here, played with life and clarity and chops, some writing to die or cry for (not least West Side Story), plenty of joy amongst a sorry racial history and an inviting performance and patter. Boston Brass play 100 gigs a year, perform workshops at top schools and play with all manner of ensembles, from orchestras through all manner of bands, marching, jazz and whatever. Fabulous and funky and plenty of fun.