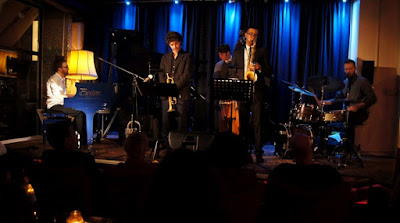 It was after the Berlin Phil so late and we just caught two tunes. Back to ZigZag for a Miles Davis Tribute. We arrived to Freedom Jazz Dance that lasted a good while and that was to finish but we got an encore of So What. Even this was a generous bit of music, perhaps 20 min of playing.

More excellent performers, two from the jam session host band a few days before, with different bass, trumpet and added sax. At least for these two tunes that we heard, this was all strength, harmonic and rhythmic freedom with driving pulse, intriguing solos. So What was all relentless speed; FJD all twisting melody. Solos for all players and all wonderful but I particularly noted the extended play on diminished triplets up and down the bass neck. Relentless, extended and a tour de force. I mentioned that one to bassist Igor and he’d obviously enjoyed it. I also chatted with drummer Tobias and his accent immediately surprised me. It turns out he’d lived in Melbourne and recently recorded in Berlin with Jeremy Rose, Jackson Harrison and Kurt Rosenwinkel. The recording is not yet released. Germans often observe the distance to Australia (and it’s annoying talking to European visitors to Berlin who can come for just a few days) but the world can seem small, too. Just a taste of Miles with some more wonderfully capable Berlin playing.