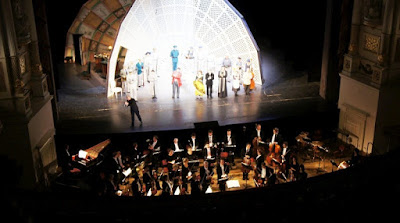 I could only laugh at “The futile precaution” and it wasn’t the only belly laugh I got from The Barber of Seville. In the spirit of testing boundaries while on vacation, we attended Rossini’s opera at the SemperOper, a grand theatre in the old town of Dresden. The Barber of Seville is famous as a great opera buffa and it certainly was comic and the performers certainly played for it. It’s got a plot of complexity and plans and confusions and a theme of love and a heroes and heroine of considerable guile. The theatre itself was part of the show. 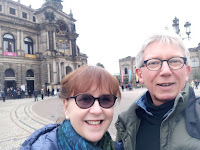 A drum space for the audience and a large and tall stage with a massive rotating area used effectively throughout. A decent, well lit pit with an orchestra of ~35, including two basses. And entertainments were generous in those days: almost 3 hours including the interval. I particularly enjoyed hearing the overture because I’d played it before, so every note is known and expected. Of course, they managed every note of the semi-quaver runs at a tempo we didn’t manage. And the three hours allowed plenty of time for the orchestra and other quick and sometimes devious lines. I was enjoying this. But to finally burst into belly laughs was a surprise to me and others. It’s all silly, but in a wily Italian way, and with some attractive music and busy singing and a convincing performance. And I must just mention Rosina’s wardrobe. She wore two dresses (one for each act) which were to die for. [See the video on the SemperOper website]. She’s the central love interest (although more clever and active on her own behalf than that description suggests). Doctor Bartolo provides lodging to Rosina and seeks to marry her. Count Almaviva is fallen in love with Rosina and seeks to marry her with barber Figaro’s assistance. Meanwhile, Rosina seeks to escape Bartolo and give her love to Lindoro, the Count in disguise. The theatre seemed to be packed with tourists, given the number of selfies and pics being taken, but this was a matinee. And despite the lofty surroundings and some opera-worthy dress, there’s still a casual presence, even amongst the locals. It’s not the first time I’ve seen this: I guess they just live closer to it. So, double entendres for “The futile precaution” or not, this was an outing that won laughs and with its corny story and vivacious performance in this grand theatre. Great fun, although not sure it’s converted me to the opera yet.

Rossini’s Barber of Seville was performed at SemperOper in Dresden. The orchestra was Staatskapelle Dresden.
Posted by Eric Pozza at 12:45 pm