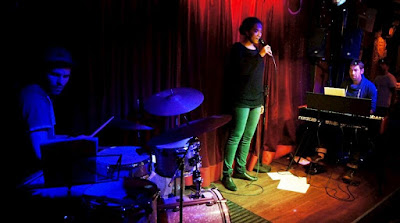 Organisation Meets is a play on words in several ways. It’s the name of an event or perhaps a band that runs regularly at Blue Note Dresden led by organist Tomas Kreibich. So, organ meets wechselnde Gäste, changing guests. Tonight he was playing with singer Fama M’Boup and drums Jannik Kerkhof and I was enthralled. Two sets, mostly standards that I recognised. First up, Alone together, then a trawl of oldies, That old feeling, I remember you, Tangerine, Comes love, Like someone I love, I didn’t know what time it was, Softly. Also a few funkier songs that I didn’t recognise.

Standards can be old and tired, but this was anything but. There was real exploration here. Fama mostly led, counting in, setting the musical agenda. Tomas ably accompanied, swinging with that two handed, two manual, virtually two-instrument-two-mind organ capability, bass and choppy chords and interpolated leads all in one. Nice. Jannik provided a rhythm bed, sticks and once with brushes, taking a few solos, at least once with rhythmic accompaniment from voice and keys. But I was fascinated by Fama, taking her voice as a lesson in improv and interpretation. It’s said that Miles used to anticipate new albums by Sinatra to study his sense of timing and interpretation. In the same vein, many bassists (perhaps fewer other instrumentalists) sing with solos. I was delighted by Fama’s sense of time, of intervals, of phrasing, on heads, on scat. Wonderfully varied from the original but essentially speaking to it. And not just in obvious spots, but also in riffs and instrumentally against that drum solo I mentioned above and intriguingly repeating and playing polyrhythmic games against vamps to end. She did that one several times and it was really a stunner. There was variation in tone, too: growls and gruff slurs and the like. Every note planned and considered; no blather of scales and arpeggios that instrumentalists can fall into. It’s a commonly observed problem and perhaps vocalists have an advantage here: the words actually mean something so there’s a solid story to portray, and it’s not quite so easy to just run scales, or perhaps the training doesn’t promote this. Whatever, Fama’s singing was a lesson in melody and interpretation and a great pleasure. But then singing is a core human activity, so there’s that advantage too. It’s not the first time I’ve been enraptured by vocals, but this was one. But more background. Both Jannik and Fama are late year students at the local music school, HFMDD Dresden, the Carl Maria von Weber College of Music. Mother Princess, support for Nils Petter Molvaer at Tonne the other night also studied at HFMDD. I asked who Fama listens to: the answer was broad, the jazz singers, but also popular styles and even singer-songwriters: wide influences. But then everything’s merged and coalesced and intermingled these days and that itself is both thrilling and inspiring. So, a great night at a hip little music bar, the Blue Note Dresden. Congrats to all.

On the night, Organisation Meets were Tomas Kreibich (organ) with Fama M’Boup (vocals) and Jannik Kerkhof (drums).
Posted by Eric Pozza at 12:24 pm

so wonderful, that creative, open, improvised, JAZZZZZZZ is recognized as a vivid art form in 2016

Andreas, Great to see you found my blog. I'm just in Berlin for another night but I noticed you listed at A-Trane. Have a great gig. Sorry I can't make it. Yes, Jazz is great and remains so, and especially great in Berlin from what I've heard. Eric