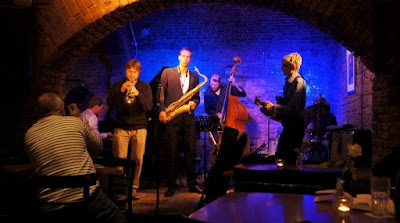 It was a public holiday in Germany to celebrate reunification and everything had been closed so I was not sure the jam session at Die Fabrik would actually be on as advertised. It was and I’m glad I took the chance. Die Fabrik seems to be a significant local jazz haunt, advertising nightly gigs and its own jazz festival (I’m missing Heidelberg’s festival next week with the likes of Jason Moran and also Di Fabrik’s). I walked in to a brick lined bar with decent PA and a very capable, restrained performance by the host band. Their style is one of reserve, think Brubeck and Getz, and they played it very well, although Mathis on piano did explore a fascinating line of dissonance against Jobim’s Wave with a modal string of tritone substitutions. To maintain that string showed real skills. 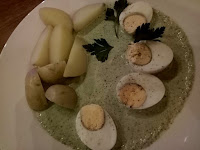 The band started with some early Ellington and Dizzy and some ballads and early swing, and continued on through the night with the standards and not much in the modal or modern jazz vein. Maybe that’s just how the tunes got called – Doxy, Billie’s bounce, Alone together (my choice), Have you met Miss Jones and the like. Virtually, perhaps all, swing but nicely played swing. The feels were good; some solos were impressive; always fun to share whatever. I played OK, if suffering from a heavier setup than I play. Oddly, I got to play with Australian Adam Miller, a jazz school teacher in Newcastle, who is over for a two-week tour playing solo guitar. Small world. Other names I did get were Chris Rucker (bass), Axel Smitt (tenor and leader), Andrej Shabashev and Mathis Hoelter (piano). I really liked the trumpeter with a lovely tone, but missed his name. Then a final chat with Chris in English. The language really is an issue. I can get on in the romance languages well enough but, to my ear, German hides its relationships with English more successfully. As proof, just look what I ordered for dinner, that for someone who avoids eggs. Easier to order beer or wine.