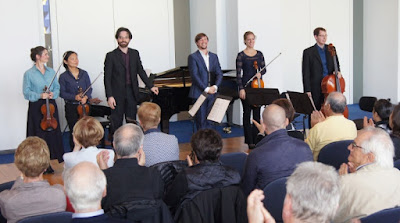 Newsweek reported* (2014) that Germany has 83 publicly-funded opera houses (and 200 orchestras). We attended Oper Frankfurt for a Sunday brunch Kammermusik im Foyer. The performers were a string quartet for two parts adding piano and tenor singer for one other. The program was Britten Three divertimenti for string quartet, a set of songs by Vaughan Williams On Wenlock Edge and von Flotow String Quartet in C major.

The space was a large box, hard but boxy behind the performers and open behind the audience, with timber reflectors to right and left and a slightly raked roof. From the first note I was enraptured by a huge, satisfying sound from the quartet. My guess is much from the players, but the space must have helped. This sounded massive, imposing, authoritorial. And the Britten was fascinating, all slides and atmospheric effects and harmonics and committed dynamics and not a touch of hesitation anywhere. And it’s not that they seemed old-hat and offay: they appeared genuinely chuffed with the performance at its end, smiling easily. Then the songs with piano and tenor. Nice firm voice and the added dynamic of the piano and an interesting balance of parts. More romantic than the Britten. It was amusing to see and hear the original text in English with a German translation - usually I see it the other way around. I caught a few words from the singing, but reading later of teams ploughing, clean and brave / behave, of sweethearts to choose (although not of whose) and dying men reminiscing and Clun and the rest. Rhymes and landscape and memories. Then another pleasure, a string quartet by Flotow. I read that he’s regarded more for comic opera and I can’t find any non-operatic works on IMSLP. It didn’t seem a great work to my ears, but it greatly pleasurable and played with a fitting neatness and I enjoyed it immensely. So, an aptly programmed Sunday-brunch concert with an immense sound and some very pleasurable playing.