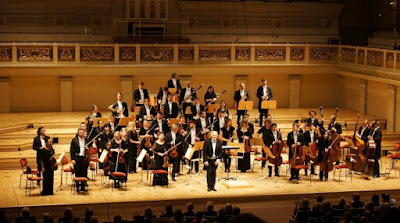 They are called the Klassische Philharmonie Bonn (Classical Philharmonic Orchestra of Bonn?) and they seem to be a touring orchestra celebrating their 50th year, if I’ve understood the German correctly. We caught them at the Berlin Concert hall (Konzerthaus Berlin) for a full Beethoven program to start their Wiener Klassik series.

The leader was Heribert Beissel and the piano soloist was Florian Glemser. The Beethoven program was Egmont overture, Piano concerto no.3 and Symphony no.7. Not quite Berlin Phil (that’s no great put down to most any orchestra) and not too loud in that large box space, but a very capable orchestra skimming through some busy lines. I particularly liked the Symphony no.7 but it’s well known and I’ve played the second movement. Again, solid dynamics, quick and capable playing, if a small a group for the space (I counted ~50 players including four basses). But how can you miss with music like Beethoven 7th? A worthy outing in an impressive concert hall with its oddly tiered access to the performance space.

The Classical Philharmonic Orchestra of Bonn performed Beethoven at the Konzerthaus Berlin under Heribert Beissel (conductor) and with soloist Florian Glemser (piano).
Posted by Eric Pozza at 12:49 pm