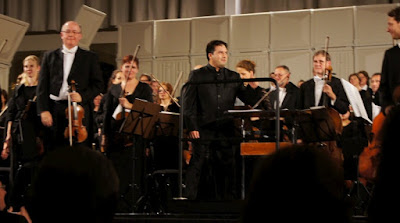 Megan warned me that I’d like this. We have an ongoing dig about liking new music; she’s the classicist and I’m the modernist. There’s some truth in it. This was the second musical outing for the day. Dresdner Philharmonie, the Dresden Philharmonic Orchestra, playing a modern program: Takemitsu String around autumn, Bartok Miraculous mandarin and Stravinski Petrushka. The location was a large space, obviously an enclosed courtyard of the Albertinum palace, with temporary seating and stage.

I wondered about the sound and the sightlines weren’t great and I fretted about what seemed like a church or clock bell that turned out to be a warning timer for the audience. That was a lovely, rich, loud bell: so different from the electronic tinkles at our concerts. It all worked in the end, and the interval included a stroll through the sculpture museum in the room next door. How civilised! Takemitsu was indeed modern. It features viola, played by Nobuko Imai, with orchestra. All unexpected long intervals, colour and shimmers, no obvious pulse (that I remember). Attractive, but floating and indistinct and filmic. Then Bartok with a pulse that gave life, but still plenty of unexpected, dramatic, changes. This was a one act pantomime ballet of three tramps and a girl forced to dance for three men, the third of which is the Mandarin. Musically it was big city chaos depicted by wave-like scales; minor seconds in 6/8 depicting the tramps; glissandi and 5/8 depicting two potential lovers; pentatonics and tritones depicting the Mandarin. Also waltzes, fugues, fanfares. This was interesting. I was amused to notice the basses counting and the brass playing: quite a turnaround. Then after interval, Stravinsky Patrushka with dissonances and polyrhythms and diminished scales and polychords. It’s the story of the loves and jealousies of three puppets: Petrushka (our Punch), the ballerina and the Moor. I loved the music but wondered about the ballet, famously a Ballet Ruse production. But what an orchestra! Big, generously loud, neat and correct with lovely intonation and big dynamics. My impression is they do serious dynamics over here. 95 performers plus conductor and soloist for a fabulous outing. And one thing I’ve learned on this trip. Any professional orchestral bassist plays 5 string in Germany (tuned with a low B), probably also Austria, and obviously German bows.

This sounds like the sort of concert I would enjoy. I know I've heard some Takemitsu but just can't recollect what. (Of course I've heard Bartok much of whose work I like a lot, and Stravinsky whose work I generally know less.)