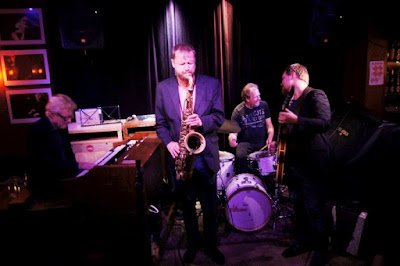 We think of Scandinavian jazz as all sparse and pensive, but this night in La Fontaine, the oldest jazz club in Copenhagen, was nothing like that. The room was on the first floor, busy and ruddy with B&W pics of performers and party lights over the bar. The music was 3 sets from 10-2 and started rhythmically relaxed but hot from the top, with a funky blues shuffle. Head and tenor solo and guitar solo and organ solo and swapped fours then head.

Like that for the night and a revelation. Some swing and blues and ballads - Green Dolphin St, Willow weep for me, Love for sale, Stanley Turrentine’s Sugar. Several blues, one that Anders learnt in NYC but without the title; otherwise some I recognised but also couldn’t name. But what a fabulous outing. Tight and a fabulously easy groove on all the tunes, perhaps with solos that dragged way behind the beat, but the tempo remained. The bass was organ foot keys or left hand and the right hand and left variously swelled or riffed or pedalled in solos or accompaniment and solos and the Leslie (he seemed to have two traditional box Leslies, one old and battered like the organ and one newer). The guitar also comped, but choppier, and his solos were wonderfully perfect and inevitable with pentatonics and heavy strings and little sustain and a real blues sensibility. Drums was simple and ever-strong and avoiding lots of syncopations and the time was ever-correct. Then tenor, starting up with well stated and lightly embellished heads (plenty more complexity as the night progressed), then letting go with more of those inevitable pentatonics but also substitutions and some sidesteps and fabulous commitment and floridly rich lines. Tenor Anders was a revelation. Just a fabulous night with wonderful grooves and great fun and volume and commitment and a hot venue (literally so). Nothing like what I expected when I set off in the cold for a Scandinavian jazz club, but so what? Great night out.