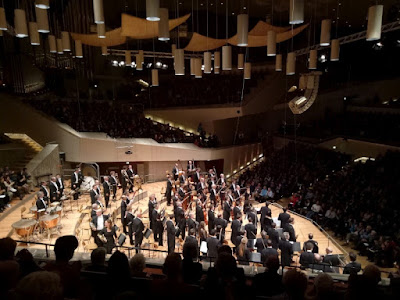 Hearing the Berlin Philharmonic Orchestra was a very great pleasure but I was surprised how I responded to it. We attended the Berlin Phil playing in their home concert hall, the Berliner Philharmonie. They were led by a guest conductor, Tugan Sikhiev, and pianist Nikolai Lugansky featured for the second work. They played Cesar Franck Le Chasseur Maudit (=The accused huntsman), Rachmaninov Variations on a theme of Paganini and Rimsky-Korsakov Scheherazade. The program listed all members of the orchestra rather than those playing on the night, and the number is large (11 basses listed, 6 played this performance). Sadly, our local product, principal bassist Matt McDonald, was not playing. If I counted right, the orchestra was 26 or 28 violins (first and seconds), 10 violas, 6 basses, 2 clarinets, 2 bassoons, 4 horns, 6 brass (2 trumpets, 3 trombones, 1 tuba), 6 percussion. Only about 12 players were women, mostly amongst the strings. The sound seemed great, not least from hall acoustics. We were seated above and just behind the violins. The audience sits right around, including some on choir benches. This was the Grosser Saal, but it was surprisingly intimate although seating 2,440. That intimacy was one surprise for me but the big one was just how little I felt this was outstanding or unusual. This just felt like what an orchestra is, or at least should be. I so often just sit and hear errors (not always reported here) and faults there are in most music. There were even some minor ones here (very minor). But what stunned me was how it felt just right, as an orchestra sounds (or should sound) like. Berlin Phil as a type specimen: the originally described example of its type. So tight, full bodied, balanced, playing at the service of melody and development, well timed, detailed, delicate with explosive hits and immediate decrescendos. More too, of course. All just as it should be, so I heard detail I’d not known of, and struggled for the quiet passages and bathed in the lush, loud lines, and wondered at the support from strings and the immediacy of their changes and the endless float of that long high harmonic from the solo first violin. And the pianist was equally a pleasure. I wondered how the conductor could, at times, be leading, but no doubt he was, sometimes spelling the beat but also sitting back on rubatos or just prompting entries or dynamics. This was all a huge pleasure but just as it should be. Is the Berlin Phil the type specimen of its species in a hall that may also be its own type specimen?