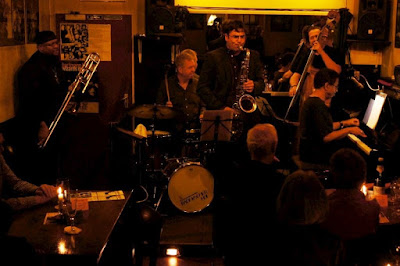 Amongst a plethora of jazz and jams, I chose the Hank Mobley Project at the Bardenscher hof jazz club, because ‘50s hard bop is close to my heart (and to my Tilt colleague James) but also for the new musos and new club. I arrived to find Tony and Olaf (trombone and bass) standing outside and we chatted. Inside, it was fairly small and informal, more Sowieso than A-Trane. But again that immense commitment and great skills that I’ve come to expect amongst musos (and maybe even more broadly in society) in Berlin and Germany.

This is not the music to find twisted syncopations or dense polyrhythms, but if you want earth blues-infused drive and nicely formed heads and plays of rhythm changes and the blues, this is it. Funny titles, too. They started with Funk in deep freeze then No room for squares. I’m thinking bongos and goaties. All Blue Note hard swing, solid grooves and blues scales (but not only) and laid back sensibilities (one solo was so far behind the beat I could have fallen from my chair) and occasional quotes. I was wondering if the quotes suggest how this music was learnt, by listening and playing with others. It’s a strength. I checked the Hank Mobley discography and it’s big: his own albums and subbing with Miles and Jazz Messengers and Horace Silver and Lee Morgan and Donald Byrd and more: so many of the names of that period. The music started hot but just grew more loud and insistent. Not much rest here. The band was all Berlin residents other than saxist Martin who’s now in Vienna but this was a get together: they have played together before; the smiles and easy conviviality showed it. Both Martin and trom Tony up front would sit in lovely harmonies on the head or in fills against piano solos. Tony would insert various grunts and vocalisms amongst some rabidly quick and tuneful and rhythmically playful soloing. Martin was more a quieter stage presence with the melodic twist. Pianist Reggie was all full handed chords and choppy left-right combinations with playful touches of stride and jazz history. Bassist Olaf walked with authority and drive and could take some devastating solos himself. (Just another hugely strong bassist in Berlin and another using Genssler strings). Drummer Michael sat in the rear with volume and drive but he, too, took on solos with verve. Two sets eventually running well past midnight. That’s another thing with this blowing music: it doesn’t let off easily. Soul station, blues and rhythm changes, Solftly, I think of you. A great night of authentic ‘50s hard blowing in contemporary Berlin. How could you not love it.