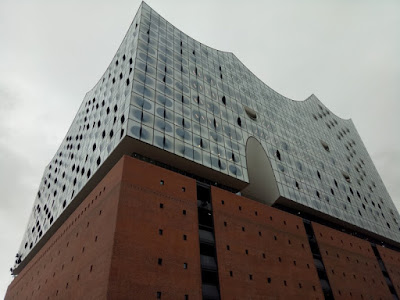 Hamburg is on the Elbe River, thus the Elbphilharmonie. We were only in Hamburg a few nights and all the music we could find on the Net was through Elbphilharmonie and the Elbphilharmonie was just next door to where we were playing. Too bad that it was still under construction (to open Jan 2017) and the gigs were elsewhere. But first that construction. I’ve read that in our era, concert halls and opera theatres have taken on the public pride role that cathedrals had in the mediaeval period. Certainly, we meet people who want to see the Sydney Opera House. And Elbphilharmonie is a beautiful work: wedge shaped with wavy roof, brown brick base topped with a box of glass panels that glow variously in different light enclosing a modern concert hall (presumably multiple halls and strangely including a hotel) reminiscent of the Berlin Philharmonie and promising excellent acoustics and lodged between canals/channels with water on three sides and activity all round. But for now it’s closed.

Our jazz was at the Elbphilharmonie Kulturcafe in the middle of town. It was probably rebuilt after the war, with statue out front and colonnades and in its own square, so it’s attractive. It’s also the local Starbucks and labelled thus; the Kulturcafe happens upstairs. Traeben (=Top Dog) is a Danish-Dutch quartet touring its third album of rock-jazz. The compositions were strongly rock to my ears with frequent rock drum grooves and mostly steady bass and heavily distorted guitar. I like that! Plenty of guitar solos, all dirty, sometimes unison lines with tenor. Tenor tended to play head with choppy tongued lines although would smooth things out in solos. No walks that I remember; plenty of syncopated, sustained passages. A few bass and drum solos. I liked the drums and his sense of time, unerring, as you’d expect in a drummer. I expect all original compositions, medium up or ballad tempos, with titles like Do you think you’re any good, Ends unresolved, No, Better than the other one. I liked the syncopations, especially the final tune which I think I counted as 9/8 with a 4/4 bridge. Otherwise there were plays on time, like 4 over 3 or rock-insistent unison 8 to the bar or ends left unresolved. Traeben had me musing over where bands set their balance in crossovers (not that it’s a conscious decision). This seemed pretty rocky to my ears, less flexible in the rhythm section and that blaring guitar (I’m an old rocker and I like it) with a layer of jazz-aware improv over.