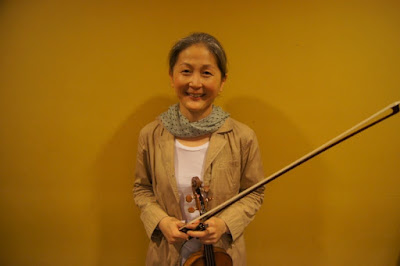 Mieko Kanno’s solo violin concert was unexpected and revelatory. We had arrived in Singapore for just a few days and initially our web investigations had uncovered nothing but an opera - not our preference. Then we discovered the Yong Siew Toh Conservatory of Music and a symposium called Performers(’) present and a series of free public concerts that went with this event. We arrived to find a wonderful establishment and this concert in the Orchestra (rehearsal) hall. We were first attracted by the promise of Bach (an easy crowd puller and it certainly works for us) but then we learnt of Mieko’s role in new music in Europe, and then we heard some. Firstly, the JS Bach Ciocona from Unaccompanied partita no.2 Dmin was bliss with stunningly effective spelling on multiple fugue lines and bowing to die for. Bowing was to prove a feature of this concert (just one), not least because it’s something I am discovering. Then something different: Salvatore Sciarrino Caprices no.2, all shimmering like wind and delicate Asian flute-like, again in the bowing, almost unheard, sometimes gripping the strings, but mostly just passing so lightly over. Mieko had asked for no interruptions, no applause between pieces. She then wired up a pickup to a Mac and John Hails La Pastora was strongly formed notes with heavy echo - I thought an initial echo around 5 seconds, then another following after another 3 seconds or so, perhaps more or otherwise - giving notes and snippets of melody that recurred and harmonies that shifted over time. Then, to finish, without processing, strong and precise pitch and bowing spelling out Bartok Sonata for violin mvt.3 and buzzing bees in mvt.4. We were in awe and dumbfounded and blessed of luck in finding music of such obviously international quality here, for fellow symposium-attendees and musicians and welcome public, an intimate concert where you can chat after. Mieko is a master of the form and this was a hugely memorable concert. But as I left, I could only compare the Singapore that’s appearing to me on this visit, vibrant and excellent and challenging, all innovation and the rest that we mumble of incessantly. Amusing as it is to notice the Australian World Orchestra here in early October for masterclasses. Is Australia living on past investments, I wondered. But, relieved of political weight, Mieko Kanno was a revelation for fabulous playing and not least for how music exists and changes over time and stays relevant.