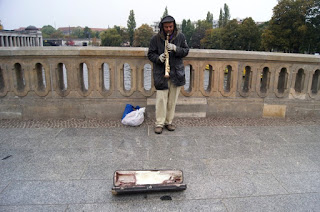 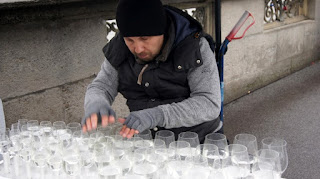 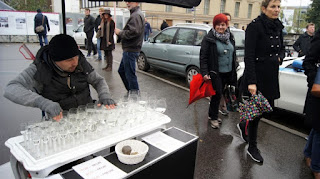 It’s been bitingly cold when the wind is out, so maybe that explains why I haven’t noticed many buskers. But we were on Museum Island as tourists, so we caught some. Adote was on a bridge and exposed so well rugged up. I heard his short, flighty, clever jazz soprano sax lines from a distance so went over for a chat. Turns out he’d been to school with Christof Titz who I’d heard a few nights before at ZigZag. The other busker was around the corner playing a far more obscure instrument, a glass harp. I’ve rung crystal glasses at a dinner party with a wet finger on the rim like many others, but I’d never heard the technique developed to play classical hits (I asked about jazz but he was reticent; his CD features Bach, Mozart and Boccherini). Sergey Karamyshev’s collection of glasses was a veritable instrument, chromatic and with a multi-octaves range, tuned for each performance by adding water, all crystal mounted and moveable in a flight case with its own period-styled, curve legged table. And he was fluid (excuse the pun) playing light classics (inevitable for such an audience) and friendly in answering many questions about his instrument (also inevitable). It’s a lovely soft and ringing tone when played with such rapid, multi-fingered skill. It has been drizzling rain but even so I wondered how he kept fingers moistened and I feared for any chipped edges, which seem a too common occurrence for our crystal glasses. But I was entranced by something truly new to me. Nicely played.

Adote (soprano sax) and Sergey Karamyshev (glass harp) busked in the drizzle for tourists on Museum Island in Berlin.
Posted by Eric Pozza at 11:48 am