Predating the Renaissance I know 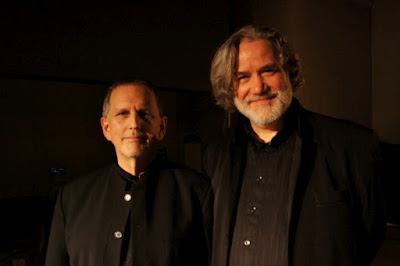 It was the Copenhagen Renaissance Music Festival but Sequentia performed music from before that. So be it: mediaeval and Renaissance often go together as early music and this was a great and revealing concert if, sadly, for too small an audience. Sequentia is renowned for its Hildegard von Bingen recordings but they do more with a long discography of well-informed period music. Well-informed is significant in this context, as we don’t know too much about early music: perhaps where it raised and lowered in pitch but not how far, or how time was involved. Like the Vespers we sang the other day, a line might extend so there may be 4/4 then a lengthy period of a single note with changing words.

I was enamoured by the voice and the instruments: they were all played so well and sounded with such strong tone in this ex-church performance space (the Koncertkiche). The real commitment to getting as close to the originals as we can is obvious and it’s not just in performance. The instruments are reconstructions of specific examples unearthed in various European sites (Germanic harp from Oberflacht, C7th; triangular harp; transverse flutes, including one made form a swan’s bone, Speyer C11th). Much of the performance was also improvised. I saw the charts, some with symbols indicating rising and falling lines; others with just words. Many languages were represented, from different sources and that early era: Frankish, Latin, German, Icelandic. There were instrumentals with sequence melodies (I guess here we only know the melodic movement, not time or specific pitch). There were stories from Beowulf and Old Icelandic Edda and the Muspilli fragment and the Evanelienbuch of Otfried von Weissenburg and the Prophesy of the Erthyraean sibyl; all old stuff but often new to me. But strangely there were musical figments I recognised. The improvisation and modal approach are obvious jazz references, but there was that end-of-line upsweep that I first noted from Siouxsie of the Banshees and lots of pentatonic-like lines. Benjamin said the 6 note-fretted strings on the harps was one reason. It got me thinking of how much we know, how much we reproduce a product of our own time and how much the original music ideas have come through to our time. But then, that’s the essential question of this period-music study: we can never know finally, but we can limit the possibilities as we learn more. The theme of this concert was the Apocalypse; the title was Fragments for the end of time. It’s an appropriate theme for these days of Trump and Climate change and the rest, and that comment was made by a local as we left. But it also just confirmed to me how this must have seemed so real in mediaeval times. The Church and God were one and all-encompassing, at least in central Europe; life was brutal and short and experience was limited. Occasionally a minstrel arrived with terrifying stories of end-time (as these sounded terrifying and the essence was story-telling; think Bob Dylan as a modern story-teller in this style). It must have been terrifying and unquestionable. So this is what we heard. Two performers of a malleable ensemble performing mediaeval stories with the most informed interpretation that we can manage today. Stunning and woeful stories of end-of-times with increasingly believable references to our times. How lucky were we to catch this gig, one night in Copenhagen.

On the night, Sequentia were Benjamin Bagby (voice, harps, symphonia) and Norbert Rodenkirchen (flutes, harp). They performed at the Koncertkirche for the Copenhagen Renaissance Music Festival 2016.
Posted by Eric Pozza at 12:06 pm