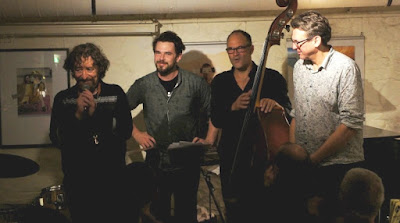 Daniel Guggenheim appeared at the Club Voltaire for the Jazz Initiative Frankfurt. Luckily, I was close enough and free enough to attend. I was convinced from the first discovery that a Jazz Initiative gig would be worthwhile, with its brochure cataloguing a string of concerts, several each week, in various venues around Frankfurt. DG himself is sax, out of Switzerland with NYC history. In jazz tradition, the band was formed the afternoon of the concert.

DG is now resident in Frankfurt. He’s played with American, now Austrian-resident, pianist Peter Madsen but not with the drums and bass, so I understand form bassist Dietmar. Drums and bass know of each other, but again not played together. But the chords were standard simple modern jazz in the style of Coltrane, and the feels in similar style, think Love Supreme, and there weren’t too many unison heads, although a few on piano with sax were impressive, and the bass had two with sax and a nice 12/8 feel at another time. And the structure of the show was interesting. Two sets, of course, early, 8-10pm. The first notes were an impressively steady and energetic pedal point in four through to a penultimate ballad and a slight let-down for the final, to get us back to life outside, perhaps. It felt apt. In the meantime, DG on the Coltrane combo, soprano and tenor saxes, huge tone, satisfying substitutions, consistent conviction and nicely modern sense of melody. The fourth harmonies from the piano felt absolutely in place, but Peter could and did also flail with atonal flourishes, I guessed on the symmetric harmonies, diminished or less commonly on whole tone. This was hugely exciting, departing then resolving, moving times, followed surprisingly closely by drummer Jonas. But a late ballad, The moment I met you, showed him in another light, tonal, restrained, searching for an essence of the tune. Peter was a favourite for my night, but piano’s ability to do it all at once frequently makes it my favourite on a night. Jonas was busy throughout, driving, energetic, except for solos where he might play tuned drums, raising pitch by stretching a skin, or explore sounds, not least with a gloriously vibrant gong. I couldn’t see that one, but it was such a pretty bell-tone. Not least, Dietmar on bass. Lovely tone that was present even when not loud (Markbass amp, Spirocore Weich, German bow, 5-string tuned CEADG for an odd fourth but an extra resonance with G string), neat intonation, modern syncopated approach with occasional walks, a few quite unique solos with bow or pizz, and most importantly good feel. This gig was consistently energetic with a late-‘60s vibe and top-notch playing for a packed club of listeners. Some wonderful players performing for a packed crowd (Frankfurt’s urban population is only ~750,000 but its greater metropolitan population is 5.5m) under the Jazz Initiative banner. This deserves more time than I will have.

Daniel Guggenheim (tenor, soprano) led a quartet with Peter Madsen (piano), Dietmar Fuhr (bass) and Jonas Burgwinkel (drums) at Club Voltaire, Frankfurt under the banner of the Jazz Initiative Frankfurt.
Posted by Eric Pozza at 6:43 am