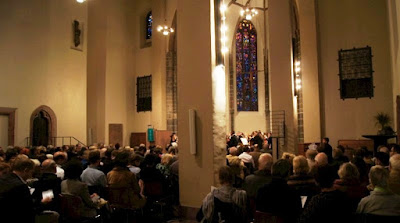 Again we miss a performance in Canberra and catch it instead in Europe. This time it was Mozart Requiem. Maruki had played it recently and several other performances are planned in Canberra before Christmas. This one was by the Thuringen Philharmonia Gotha with the Cacilienchor Frankfurt, in all numbering perhaps 100 performers, with attendant soloists and conductor. The location was another restored church, the Heiliggeistkirche of the Dominikanerkloster. It’s a tall church with large columns and we bought tickets at the door, so we had one in line of sight, but amusingly, and instuctively, I could see the German bowing of the two bassists. Nicely matched, wonderfully quick and accurate and fittingly varied in attack. 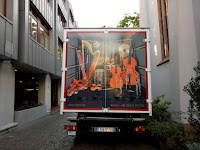 This was a formidable outfit. The performance just confirmed it. They strangely played the Requiem to Lacrimosa and the stopped. The playing was clear on all the trickiest phrases, but more than that, the dynamics were immense, the sense of timing, little rits and ralls and pauses were frequent and expressed the mass with great tenderness, the balance of individual instruments carrying a melody was revealing. I heard lines that I’d missed in previous listenings, where a violin or other features. And the four voices sang clearly and strongly and were enriched by a generously live space that left an obvious decaying presence after sudden stops. Then the major work of the night, Mozart Great Mass in C minor KV427. This was longer, presumably we heard all that Mozart left us, although this original remains unfinished (missing both Credo and Agnus Dei). It was his last mass (other than the Requiem) and was scored for similar performers. Again, the magnificent performance, the despair or joy that’s expressed in this story, but Mozart’s approach made this an obvious partner for the Requiem and must have been a huge guide to Sussmayer who famously completed the work after Mozart’s death. The same sense of counterpoint, of similar drama in parallel passages, a similar use of choir and soloists. We had little to see past the column but perhaps it just added to our listening and that was blissful. A wonderful concert garnering as long an applause as I have ever heard. Obviously we were not alone.