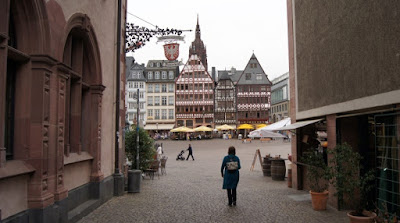 Arriving in Frankfurt feels so much like returning home. It’s not that I am German, but that I am European in heritage and outlook. So the ageing airport, the imperfect signage, the delayed shuttle bus, the unkempt foliage felt homely, if in contradiction to the image of German efficiency. Later, so did the infectiously friendly service, the doggedly satisfying sauerkraut and knoedels and goulash and beers. Obvious tourist (and genuine local) fare, but inviting. But one thing deeply surprised me with its hometown honesty: the system for bar payments at the Club Voltaire. I was a Club Voltaire for the Daniel Guggenheim Quartet.

More on that later. Now, Frankfurt is a financial centre with its share of expensive (German) cars in the streets and a Euro symbol in coloured lights in Willy Brandt Place and more than its share of skyscrapers (if only in a European sense) and its requisite Opera House. And it’s had its share of loss, being obliterated in WW2, although the rebuild of the earlier city is convincing, if sometimes skin deep. A deeply sad experience of a visit to the Catholic Cathedral (the Dom) just demonstrates this. The shell was left standing after Allied bombings, the rebuild is sparse and the modern stained glass windows are out of place, but the presence of the beautiful moveable art that was saved then returned just highlights the loss. A Van Dyck, a series of large carved wooden religious triptychs, the stone and timber statuary, the profound reverence of the mediaeval relief Stations of the Cross. The middle-ages devotion contrasting with a modern yearning to remember and honour history. And we continue to do it: Aleppo is in our pages daily. All inevitable in human society, so we are told. All repairable, until the damage is big enough that it’s not. All history that’s remembered and rebuilt, until there’s not the money or the resources to archive or rebuild. Then it’s lost. This is the biblical Armageddon. Great civilisations have been lost in the past, and we have entered the Anthropocene and our powers are now Earth-shattering, literally.

But amongst all this evident history of destruction, the payment system for drinks at Club Voltaire was genuinely heartening. Drinks were provided, the charge was written on the coaster, the drinker pays as s/he leaves at the end of the night. It’s not a common now, even in Frankfurt, but remains in this cultural, slightly rough around the edges, joint. A real-life expression of Obama’s hope. I’ve had credit in a jazz bar in Chicago, but they took my credit card for that. Does honour actually breed honesty or are the cynics right? Which does the evidence support? Most likely they are both right sometimes: the cynics with their fear of destruction and the saints with their faith in humanity.

But that’s not jazz, just musings in Club Voltaire awaiting Daniel Guggenheim and his quartet. That can wait for the next post.
Posted by Eric Pozza at 1:41 pm