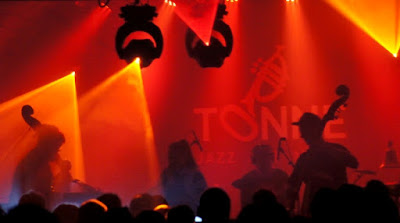 There were numerous ways in which this night was unexpected and the venue itself was the first. JazzClub Tonne is one of the major venues in Dresden, advertising itself with the logo “Jazz Art Music”, located centrally, in a basement. Nothing unexpected there. Three spaces downstairs: one with cafe tables; one with a bar; one with ... a stage and little else. A few sofas down the back; a long room with coffered basement ceilings; a few standing tables for drinks; a spot for the audio and lighting guys, some glowing screens; a stage. This is looking strangely like a pub venue.

I found a piano riser down the back and sat. Managed a few stilted conversations in English while waiting (I’ve had nothing but pleasure with these Germans). I was here for Norwegian Nils Petter Molvaer but there was a support band first: Mother Princess. They started oddly with two bowed double basses, drums and female vocals. I checked the lineup - yes, two bassists. My impression during the night was mostly one bass, one keys, perhaps one keyboard bass, but I was distant. Then through a set of electronica, oddly sparse and disjuncted drum grooves (as is the way), synth-rich sequencing, even-8 feels, certainly no swing and probably little improv backing busily complex female vocals with a punk sensibility - squeals, twists, rising ends of phrases - but again with processing, electronically harmonised lines, richly effected, echoes and the rest. Mostly two chords, sometimes three or so; some verse-chorus-like structures; incessant, even, powerful yet open, electronically insistent, with those vocals over. I caught some vocals and they were surprisingly of the most common theme of all: “The meaning of true love ... If I can do it / if I can believe it”. Strange that all these new digital sounds, these lights ad volumes and performance returns to this old theme. Some things are timeless. Oddly located so a disjunction, more Triple J than jazz club, but I enjoyed the insistence of electronica and disjuncted drums and these tangled female vocals.