Trombone is having its place in the sun in small as well as large ensembles. But tuba remains a rare instrument, despite its outing when the Sam Young Quartet played last night at Hippo. Valdis Thomann (trombone, tuba) was the player who revived this big and impressive brass horn for us. His partners in the quartet were Sam Young (drums), Aron Lyon (guitar) and Gareth Hill (bass). And the quartet became a quintet when Miroslav Bukovsky joined in for later sets. 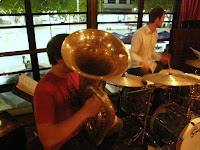 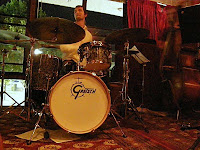 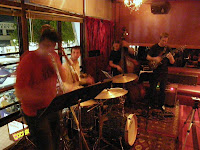 The tuba was fun. Big and clumsy, with a deep and sweet brass sound. Valdis played it both as a rhythm instrument (at times in unison with the bass), and as a pretty slow solo instrument. Nice to hear (and very difficult not to see) but totally obscuring the player below the bell.

But the night was more than tuba. The band started with John Scofield’s tight and simple tune, Cool. Then on to a range of originals by various band members. They varied in time and rhythm. There was 6/4; there was an occasional walk, but the bass lines were mostly syncopated and funked up. There was sharp and open and expressive drumming from Sam; good solid, ever-reliable bass lines from Gareth; dirty and distorted, middy electric guitar solos and some lovely airy soundscapes from Aron using wah and echo. Valdis pulled tuneful and fairly bluesy baritone sounds from the trombone, performing with real physical involvement. The tenor of the night changed somewhat when Miro joined in. The melodies obviously displayed richer harmonies, with that lovely sweet tonality of a brass front line. Miro’s solos were fast and challenging, and the band sounded just a bit harder and tighter and more intense. The tunes they played with Miro also seemed longer and more composed/arranged. For me, these were the highlight the of night. These were more worldly and meditative; I thought here of storytelling and even magic realism.

A nice night of restrained volume and comforable, worldly music. It will be interesting to compare the performance in few weeks when they appear as the Gareth Hill Quartet at the Gods.
Posted by Eric Pozza at 7:10 am